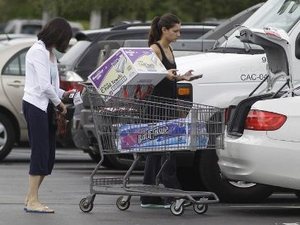 Americans are making a little more money and spending a lot more.

Under normal circumstances, that would be a troubling sign for the economy. But a closer look at some new government figures suggests another possibility: People are saving less money because they're earning next to nothing in interest.

Saving is already difficult because of more expensive gas and food. It's even tougher because of the lower returns — the flip side of super-low interest rates that the Federal Reserve has kept in place since 2008 to help the economy.

Critics say the Fed is punishing those who play by the rules — those careful enough to set aside money for savings or people who built up a nest egg and are living on fixed incomes that depend on interest.

Spending was especially strong on durable goods — things like cars, appliances and electronics.

At the same time, what they earned was mostly flat.

So to make up the difference, many have cut back on savings.

The savings rate fell to its lowest level since December 2007, the first month of the recession — and right about the time the Fed started its dramatic series of interest-rate cuts.

Considering how little you can get for parking your money at a bank, it hasn't been a tough choice.

"Consumers have hit a level of saturation in their savings," said Marshal Cohen, chief industry analyst with market research firm The NPD Group. "The propensity is to spend."

The annual yield on six-month certificates of deposit was unchanged this week at 0.23 percent, according to Bankrate.com. Five years ago, it was 3.62 percent.

If you put your money in the six-month CD today, you'd make about enough to buy a burger.

Paul Ashworth, chief U.S. economist at Capital Economics, said the trend could mean more spending by Americans. But it will take robust personal spending — along with improvement in the depressed housing market — to get the economy going again.

Ashworth said his firm is not too concerned with the decline in savings because it partly represents "a sharp decline in debt servicing costs."

In other words, low interest rates mean it's cheaper to borrow money.

The Fed began cutting interest rates four years ago at the start of the financial crisis. The rate cuts took the federal funds rate, the key for short-term interest rates, from 5.25 percent down to near zero, where they have stayed since December 2008.

The central bank has said it will keep rates super-low into 2013 as long as the economy stays weak. While that means low returns for savers, it is designed to encourage people and businesses to borrow more.

Many borrowers tend to be young families who are spending most of their income anyway.

The loss in interest income tends to hit older households, which are saving for retirement and counting more on bonds and other fixed-income securities.

Consumer spending is closely watched because it accounts for about 70 percent of economic activity.

A sharp rise in spending over the summer helped the overall economy grow in July, August and September at the fastest pace in a year.