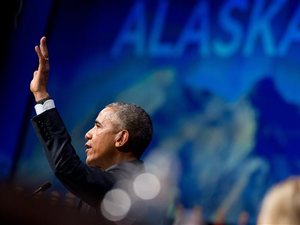 U.S. President Barack Obama warned Monday that climate change is no longer a problem of the future, but rather a challenge for now and one that will define the next century.

Describing the "urgent and growing" threat that was not being addressed quick enough, Obama sketched the problems already facing people living in one of America's last wilderness frontiers.

The challenge "will define the contours of this century more dramatically than any other," he told a conference in Anchorage, before a scheduled visit to a glacier.

"Human activity is disrupting the climate, in many ways faster than we thought," he said, with one eye on Republicans who reject humans' role in heating the planet.

"The deniers are increasingly alone, on their own shrinking island.

"The science is stark, it is sharpening, and it proves that this once-distant threat is now very much in the present."

"We are not moving fast enough," Obama insisted, as he tries to build support for an international pact to curb warming.

In December, representatives from around the world will gather in Paris to agree to cap global temperature increases by two degrees Celsius (3.6 degrees Fahrenheit) over pre-industrial levels.

"This year, in Paris, must be the year that the world finally reaches an agreement to protect the one planet we've got while we still can," Obama said.

Earlier, ministers from the United States, European nations, Japan, Singapore and South Korea issued a joint statement at the conference, vowing "strong determination" to reach an "ambitious outcome" at the December meeting.

While in Alaska, Obama will try to take his message to a broader audience by getting a "crash course in survival techniques" from insect-eating British adventurer Bear Grylls.

The footage will be used for an upcoming episode of "Running Wild With Bear Grylls."

Tasks they have been given include eating mice, jumping out of planes and crossing desert canyons -- activities that the Secret Service would not normally allow the president to tackle.

"America recognizes our role in creating this problem, and embraces our responsibility to help solve it," he said.

"And I believe we can solve it."

The president has just imposed, much to the chagrin of his Republican opponents in Congress, strict standards to reduce carbon dioxide emissions from power plants.

He again angered Republicans on the eve of his trip to Alaska, announcing a decision to rename Mount McKinley, the tallest mountain in North America, with local name Denali.

The mountain had been named in 1896 for William McKinley, who later became the nation's 25th president.

But local authorities had worked on the change for years, restoring an Alaska Native name with deep cultural significance.

The move was met with anger by McKinley's fellow Ohio Republican, John Boehner, the speaker of the House of Representatives.

"There is a reason president McKinley's name has served atop the highest peak in North America for more than 100 years, and that is because it is a testament to his great legacy," Boehner said.

"I'm deeply disappointed in this decision."