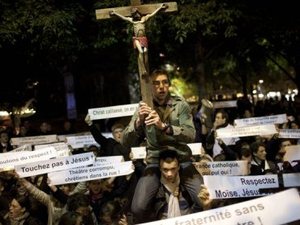 The city of Paris is filing legal complaints against a group of fundamentalist Christians who have been protesting a play currently showing at the municipal theater, claiming it is blasphemous, the mayor said Friday.

Riot police have been called in to chase off demonstrators bearing crosses loudly protesting in front of, and sometimes inside, the Theatre de la Ville since the Oct. 20 opening of the play.

"Sur le Concept du Visage du fils de Dieu" ("On the Concept of the Son of God's Face"), by Italian Romeo Castellucci is a provocative story centering on a young man caring for his aged and incontinent father.

A portrait of the face of Christ looms large onstage throughout and projectiles are ultimately thrown at it.

Each night, police have had to defend the theater from a group of ultra-Christian protesters — organized by the group Renouveau France — who turn up with crucifixes and banners denouncing "Christianophobia," determined to disrupt the show .

Mayor Bertrand Delanoe said in a statement that Paris can't tolerate "such expressions of fundamentalism and intolerance."

His statement said the city is filing complaints when demonstrators try to interrupt performances.

The play has been shown elsewhere without incident, including in Poland, Italy and Spain — traditionally Catholic countries.

Commentators backing the play contend it is not intended to offend Christ.

The director of the theater, in the center of Paris, Emmanuel Demarcy-Moto, denounced the "odious threats" and vowed that the show must go on.