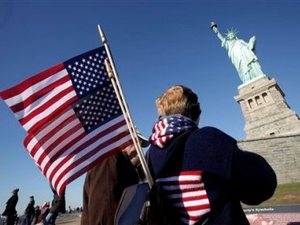 Scores of people waved tiny flags after taking the oath of U.S. citizenship at the foot of the Statue of Liberty on Friday, 125 years after the iconic American symbol welcoming visitors and immigrants was dedicated.

"We are a nation of diverse people," Secretary of the Interior Ken Salazar said during the naturalization ceremony on Liberty Island. "And that diversity strengthens our nation."

The new Americans, 125 immigrants from 46 countries, pledged to renounce foreign power, then posed for photos with their citizenship certificates.

"I feel like if you live in a place, you should have a say in the politics," said Paul Currie, who moved to the U.S. from South Africa eight years ago. "Otherwise, you're an outsider."

Silvia Hodges, who came to the U.S. from Germany in 1999, said the ceremony made her feel "like I belong here — and I really want to vote."

The Statue of Liberty, a gift from France, was conceived to symbolize the friendship between the two countries and a shared love of liberty. President Glover Cleveland dedicated the statue on Oct. 28, 1886.

New York Mayor Michael Bloomberg said, "If anybody around this world wants to pick up their family and move so that their family can have freedom — freedom to speak, freedom to be in charge of their own destiny, all the freedoms that we have incorporated into the Bill of Rights — they always come to America."

Actress Sigourney Weaver recited Emma Lazarus' "The New Colossus" and gestured to the statue behind her at the words "a mighty woman with a torch."

On Friday, Cleveland's grandson George, a dead-ringer for the former president, was on hand for the event and received a plaque from the National Park Service.

George Cleveland, a 59-year-old executive director of a senior center in North Conway, New Hampshire, said his grandfather was prescient when he said that "a stream of light shall pierce the darkness of ignorance and man's oppression, until liberty enlightens the world."

"We are still a work in progress," George Cleveland said.

Then, with a 3-2-1 countdown, webcams streaming views from the statue's torch were switched on. The cameras offer panoramas of the Manhattan skyline, the Hudson River and Liberty Island.

"It's really a wonderful way from people from around the world to connect with Lady Liberty using today's technology," said David Luchsinger, the superintendent of the statue and Ellis Island.

On Saturday, the statue's interior will be closed for renovations for about a year, though Liberty Island will remain open.

Vacationers Benoit and Veronique Poullain of Rouen, France, were happy to see the statue on her 125th anniversary. Veronique said it was "like New York, big!" She said the French are "very happy to have contributed this symbol."___Online: http://www.earthcam.com/statueofliberty