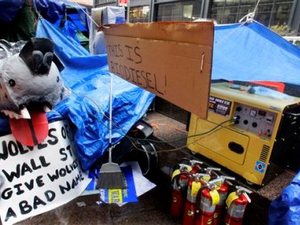 While more U.S. cities are resorting to force to break up the Wall Street protests, many others — Philadelphia, New York, Minneapolis and Portland, Oregon, among them — are content to let the demonstrations go on for now.

New York Mayor Michael Bloomberg, for example, said Friday that the several hundred protesters sleeping in Zuccotti Park, the unofficial headquarters of the movement that began in mid-September, can stay as long as they obey the law.

"I can't talk about other cities," he said. "Our responsibilities are protect your rights and your safety. And I think we're trying to do that. We're trying to act responsibly and safely."

Still, the city made life a lot harder for the demonstrators: Fire inspectors seized a dozen cans of gasoline and six generators that powered lights, cooking equipment and laptops, saying they were safety hazards.

In the span of three days this week, police broke up protest encampments in Oakland, California, Atlanta and, early Friday, San Diego and Nashville, Tennessee.

State troopers in Nashville cracked down after authorities imposed a curfew on the protest. Twenty-nine people were arrested and later released after a judge said the demonstrators were not given enough time to comply with the brand-new rule. They received citations for trespassing instead.

Several dozen people remained on the grounds after the new curfew passed Friday at 10 p.m. It was not immediately known how many protesters were arrested.

More than 200 people came to a meeting Friday night to talk about the arrests and future plans.

Fifty-one people were arrested in San Diego, where authorities descended on a three-week-old encampment at the Civic Center Plaza and Children's Park and removed tents, canopies, tables and other furniture.

Officials there cited numerous complaints about human and animal feces, urination, drug use and littering, as well as damage to city property — problems reported in many other cities as well. Police said the San Diego demonstrators can return without their tents and other belongings after the park is cleaned up.

Earlier this week, in the most serious clashes of the movement so far, more than 100 people were arrested and a 24-year-old Iraq War veteran suffered a skull fracture after Oakland police armed with tear gas and bean bag rounds broke up a 15-day encampment and repulsed an effort by demonstrators to retake the site.

Left-wing filmmaker Michael Moore addressed hundreds of protesters in front of Oakland's City Hall on Friday, saying the events there over the past week have helped change the national discussion about the movement. He urged them to continue their movement until they run the country.

Other cities have rejected aggressive tactics against protesters, at least so far, some of them because they want to avoid the violence seen in Oakland or, as some have speculated, because they are expecting the protests to wither anyway with the onset of cold weather.

Officials are watching the encampments for health and safety problems but say that protesters exercising their rights to free speech and assembly will be allowed to stay as long as they are peaceful and law-abiding.

In London, church and local government authorities are going to court to evict protesters camped outside St. Paul's Cathedral — though officials acknowledged Friday it could take weeks or months to get an order to remove the tent city.

Several hundred protesters against economic inequality and corporate excesses have been camped outside the building since Oct. 15. On Oct. 21 cathedral officials shut the church, saying the campsite represented a health and safety hazard.

It was the first time the 300-year-old church, one of London's best-known buildings, had closed since German planes bombed the city during World War II.