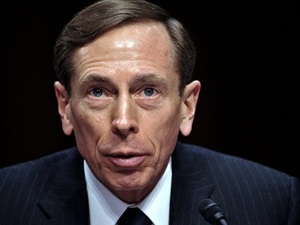 Former CIA chief and retired general David Petraeus wants the United States to consider working with some members of al-Nusra Front to tackle the Islamic State group in Syria, he said Tuesday.

In a statement to CNN, Petraeus said some members of al-Nusra Front might be persuaded to join the coalition battling the IS group.

"We should under no circumstances try to use or co-opt Nusra, an al-Qaida affiliate in Syria, as an organization against ISIL," Petraeus told CNN, using another acronym for the IS group.

"But some individual fighters, and perhaps some elements, within Nusra today have undoubtedly joined for opportunistic rather than ideological reasons: they saw Nusra as a strong horse, and they haven't seen a credible alternative, as the moderate opposition has yet to be adequately resourced."

So, Petraeus argued, it may eventually be possible to "peel off so-called 'reconcilables' who would be willing to renounce Nusra and align with the moderate opposition to fight against Nusra, ISIL, and (Syrian President Bashar al-Assad.)"

Petraeus became a household name in the United States when he oversaw the troop "surge" in Iraq in 2007, and U.S. leaders credited him for salvaging the troubled war effort.

Part of that operation saw the decorated general convince Sunni fighters to stop fighting with al-Qaida and to work with the U.S. military.

His statement Tuesday followed the publication of a story in the Daily Beast that pointed out the irony of the United States working with anyone connected to al-Qaida, which carried out the September 11, 2001 attacks and triggered America's so-called war on terror.

The Daily Beast said several officials it had spoken to found Petraeus' idea to be politically toxic, almost impossible to carry out and strategically risky.

In his statement to CNN, Petraeus said using any Nusra fighters would require "both the rise of much stronger, moderate opposition groups -- backed, again, by the U.S. and the coalition seeking to defeat ISIL -- and at the same time, intensified military pressure on all extremist groups."

Petraeus, 62, had a spectacular fall from grace this year when he pleaded guilty to providing classified secrets to his mistress. He was given two years' probation and a $100,000 fine.

Dear Mr. Petraeus: are you aware I am secular shia, I am a member of Hezbollah, and i also support the regime in Iran. Are you also aware I performed 3 pilgrimages to Qom already.

FT, mowaten, southern and I are the 4 most informative posters on naharnet. No wonder our comments are always in the VIP section of the top rated comments. We always have the most votes and we are popular because we represent the truth in propaganda.

dearest lebjack:
As you know I have tremendous respect for you and consider you an honest and reliable poster. I need your help: You know I got repeatedly banned and humiliated but why is the_roar not posting as well? What could it be?

@Petraeus
do you know when my husband mowaten will get the U.S nationality that he declined years ago because of the U.S biased foreign policy?

I am laughing now, the U.S wants to support Al Qaeda in tackling ISIS, the same Al Qaeda they said 14 years ago destroyed the two towers and all that.

do you think by denying it is a martyred iranian jihadi terrorist family in your avatar is going to get you anywhere?

Do you think by repeating the same useless sentence will get you anywhere?

I only seek the truth. Once you admit it is a martyred iranian jihadi terrorist family in your avatar then I rest.

You seek attention, that's the difference. Get into the debates instead of acting like a spoiled little girl.

answer me: is that a martyred iranian jihadi terrorist family in your avatar?

They are Heroes, so get on with your miserable life. This is the last answer I will give you, from now on you either debate or get ignored.

Who are you trying to fool? Al Nusra have sworn loyalty to Zawahiri the leader of Al Qaeda worldwide.

He is the one that now wrestles with Baghdadi to control their fake caliphate that you want for Lebanon too.

Southern, haven't you heard? Nusra are just freedom loving moderate people. They love democracy and they are peaceful according to March 14 & the United States/Israel that is.

They keep our captured soldiers in 5 star hotel and they "never" beheaded them or beat them or bombed civilians in Lebanon aswell as Syria.

do you live in dearborn MI?
well said

Your ignorant and bigoted non-arguments speak for themselves.

Most Americans have no idea what Nusra is? But, the white man (persons of European heritage) will become a minority by 2042. Who will you try to please then?

"Petraeus became a household name in the United States when he oversaw the troop "surge" in Iraq in 2007, and U.S. leaders credited him for salvaging the troubled war effort. Part of that operation saw the decorated general convince Sunni fighters to stop fighting with al-Qaida and to work with the U.S. military." ...They succeeded by paying large bribes! The US does not have the wealth to bribe everyone...all the time.

The US followed that stupid policy in Afghanistan ONLY to pay for it in the future.