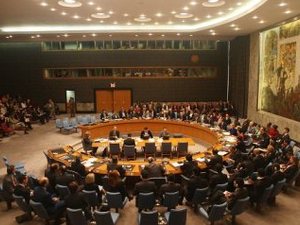 The U.N. Security Council is expected to hold an emergency session on Wednesday to discuss anti-government protests that have rattled Lebanon in the past two weeks, diplomats said.

One of the diplomats told An Nahar newspaper that the Council will hear a briefing from U.N. Special Coordinator for Lebanon Sigrid Kaag via video conference on the latest developments in the country, mainly the protests against the political class.

It was not clear, however, if the Council would issue a statement on the demonstrations.

Another diplomat told the daily that the department headed by U.N. Under-Secretary-General for Political Affairs Jeffrey Feltman, who is a former U.S. Ambassador to Lebanon, called for Tuesday's session.

Angry protests that suddenly erupted last month over the government's failure to deal with the garbage crisis have evolved into the most serious anti-government demonstrations in Lebanon in years.

The protesters seek to challenge the political class that has dominated Lebanon and undermined its growth since its civil war ended in 1990.

The waste crisis erupted when the Naameh landfill that lies south of Beirut was closed on July 17.

interesting to say the least. The Security Council will meet to discuss our waste crisis. We are so important for the world.

Indeed, but this worries me:

"Another diplomat told the daily that the department headed by U.N. Under-Secretary-General for Political Affairs Jeffrey Feltman, who is a former U.S. Ambassador to Lebanon, called for Tuesday's session."

Anything that Feltman does cannot be good for Lebanon, if things go his way, I expect them to back the corrupt government and try to find a way for them to survive the crisis.

By the way not since 1990, it is the same political class since the indepence of Lebanon, ok the security council will hear briefing...so what should we be impressed? only the population of this country if united and through perseverance can end the feudal era which through divide and rule practice , corruption , and hidden discrimination brought suffering and misery to the majority of the Lebanese people.

How about an international court to try these cleptocrats ? How about enforcing the existing law ( MIn Ayn Laka Hazza?}
Gebran Bassill's will soon become a billionaire . Why do you think his father -in -law insisted on Oil and Gas portfolio?
Shame, shame shame

I think that the US does not want a repeat of the arab spring in another country given the mess that it has caused elsewhere.