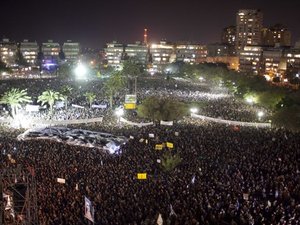 Activists and supporters angered over the spiraling cost of living in Israel are to take to the streets of several cities on Saturday following an eight-week break.

The largest protest is expected to take place in Tel Aviv from 9:00 pm (19:00 GMT) under the rallying call of "Return to the Streets", organizers said.

On September 3, almost half a million Israelis across the country took part in the largest demonstration against the soaring cost of living and house prices since the protest movement began in mid-July.

Organizers of the latest rallies called on their website for protesters to demand parliament scrap the 2012 budget and submit a new version "taking into account the demands of the people."

"Go out in huge numbers to show our elected leaders that we are still here," they urged.

The social movement broke out after young Israelis angry at the cost of housing in Tel Aviv pitched tents in the middle of an upscale neighborhood to express their frustration.

The tent protest quickly mushroomed, with dozens of similar encampments sprouting in towns and cities across the country.

But after the September 3 rally, its leaders announced the dismantling of the tent cities and that they would seek to pressure Prime Minister Benjamin Netanyahu's government through other means.

On October 9, Israel's cabinet approved the outline of economic reforms intended to address the rising frustrations, but protest organizers have said they do not go far enough.

there are many bright economists in Israel. How come they cannot fix this problem? Simply because a large part of the government's budget is spent on military issues. Subsidizing houses means a larger deficit and more problems later.
A tight monetary policy to reduce housing prices means few can afford to get loans and more join the riots, which could take forever to happen anyway.

Solution? Steal some land from the Palestinians to increase the supply of land and reduce its prices. How pathetic.