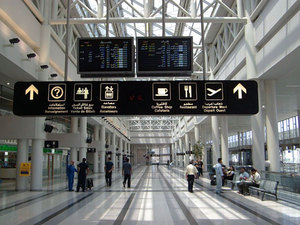 Authorities at the Rafik Hariri International Airport thwarted an attempt to smuggle narcotics into the country en route from Brazil, through Addis Ababa and Cairo, the state-run National News Agency reported on Thursday.

The scheme was thwarted Thursday when a Swedish national tried to smuggle the ample amounts of narcotics, that almost weigh 18kg, in 12 plastic containers, NNA added.

Police said the material are believed to be cocaine paste.

The man hid the containers in two of his luggage.

The Swedish suspect and the confiscated drugs were referred to the Central Anti-Drug Office in Beirut for further investigation.

The Anti Drug Special Agents of the ISF confirmed the arrest of Ali Mehdi Jaafar, a Lebanese Shia national who was attempting to smuggle 18 kgs of cocaine hidden in his suitcase. The smuggler was arrested after immigration and custom officials became suspicious after verifying his fake Swedish passport.
Without further delay, the smuggler confessed to belonging to the global terror organization known as Hezbollah. He was remanded in custody and referred to the concerned judicial authorities for conviction and rehabilitation.

Hezbollah is a known terrorist organizations with links to organized crime, money laundering, political assassinations, and drug trafficking. The leader of the group has publicly ordered his fanatical followers to use, trade and export drugs to finance terrorist activities in many parts of the world.
Source: OTV Agence Press

lol what imagination you have. too bad the article says it was a "Swedish national"

why the nervous laugh mowaten?

@mowaten E-X-C-E-L-L-E-N-T. Still laughing since the day you declared with a straight face you were a shiaa atheist and also a member of hezbollah with only one account. I think i will also continue to laugh at your statement "lol what imagination you have ". Thank you Thank you

Lol yeah lol, although Bulgaria is looking for a "Canadian national" and an "Australian national" hezballah terrorist members involved in the terrorist attack there.

mowaten why do you always rush to defend hezbollah and the shiaa on every article? Didn't you say you were secular and atheist?

Is it an ethnic Swedish national ya Mowaten? What would he be doing at this particular time in Lebanon? And OK, if he was just a tourist, why and how would he be in possession of such a large quantity of drugs in his suitcase? Did he just buy it from the Souk El A7ad? Though the article stops short of shedding any more light on the story, but the whole thing reeks of foul-play by a member of a large organization that is well implanted on both Swedish and Lebanese soils. The trouble is that our authorities will stop short and dissimulate the matter in due time. If it was someone that did not belong to such a large organization, then by now his full ID would have been released to the public, if you caught my drift about that dual legal system we have here.

phoenix i agree with you and I don't doubt josh's story one bit. mowaten acts as if his clan are saints and have never done anything similar.

haha the troll is voting himself up without shame or honor;)

rofl @terrorist
I don't why but the name is so mowaten;))

What a bunch of rotten comments, by the rotten sectarians you are.
Can any one of you claim he does not yet know that every claim by "joebustani" is pure fabrication and sectarian incitement?

What great lengths you go to pretend not seeing the disinformation he spreads and instead try to attack me with your pathetic slander. You guys are not morally corrupt, you're morally BANKRUPT.

mowaten lost his dignity when he signed up for 101 accounts in Naharnet
Mowaten sent a distress signal as he also lost some of his account details as he was embarking on a boat towards the greek island of Kos.
Save the his data! SOS

eat your heart out mowaten

mowaten iraní , is Douma still in Lebanon according to you iranians? hahahaha!

mowaten why are you surprised? you are a perfect example of the dilemma at hand. You you are an "Iranian national" but you also carry a Lebanese passport, am I right?

such a good point you make southern

please call us southern, we found a job for you @ashraf.farouj

Southern you should have listened to your mommy, look both ways before you cross!! In plain language it's not always the drivers' fault that you keep getting bumped.

Southern, though done in sarcastic style, however the truth does hurt.

@Southern I am impressed you are old enough to play with LEGOs.. who would have thunk it.

Obviously you can take the boy from dahieh, put it thru schools and college, give him degrees, masters, doctorates in whatever but you cannot take dahieh from the boy here nature wins over nurture every time! #pointless

Apparently you keep hitting nerves, you're obviously not a very good dentist! Where from did you get your degree, the famous "Qom dentistry-ish university and delicatessen (Now Halal!)"?

An angry Hezbollah partisan is one that does not respond as a civilized human being. Furthermore when challenged and short of answers, he resorts to thumbing down his opponents. What is even worse, he makes it even more despicable by creating more trolls and finally lowers himself to gutter lows by using insults and derogation. Well, if our comments make you so uncomfortable, why do you come to this forum? I just forgot, rats live in sewers, daylight does blind them even further. Well, this is my little gift to you you cowardly rats.

i thought you did not speak arabic roar? maybe sideways?