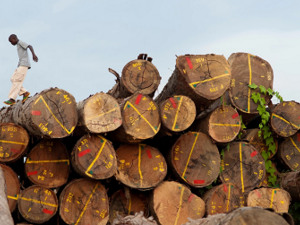 Anne-Marie Ndong Obiang has a machete attached to her belt, which she assures us is “for cutting off poachers’ fingers”. In her spotless forest-green camouflage uniform she does not appear to be joking. Working for Gabon’s National Parks Agency (ANPN) she has firsthand experience of the harsh conditions in the big reserves in the north of the country, some almost impenetrable. Gold prospectors, often from neighboring Cameroon, have been known to leave craters 40 metres deep in the middle of the woods.

Obiang is head of the Raponda Walker Arboretum close to the capital Libreville, which is on the Atlantic coast. Her priority here is to combat uncontrolled urban sprawl. “My fellow eco-wardens and myself can’t look the other way for a moment without someone starting to build beside the track,” she says. True enough quite substantial houses are springing up, with no planning permission, jeopardizing the exceptional forest ecosystem that is bordered by a few sandy creeks – miraculously spared so far. To the south, the city is spreading unchecked. “We have about 40 endemic plant species here and we’re still identifying new ones, despite the airport being only 15 minutes away,” she says. Her favorite natural landmark is an Aleppo pine, 57 meters tall, which she likes showing to visiting schoolchildren.

The equatorial forest is a key feature in Gabon’s identity, covering almost nine-tenths of the country. Until now the rate of deforestation has been less than 0.02% a year. The population is only 1.8 million, most people live in urban areas, and the economy is largely dependent on oil. “Out of 23 million hectares of woodland we’re currently exploiting less than two million,” says Tanguy Gahouma-Bekale, permanent secretary of the National Climate Council “But we don’t intend to leave our forest under a cloche. We need to exploit it, with due restraint, because we’re keen to achieve emerging-economy status very soon.”

In 2009 Gabon banned the export of whole logs, a trade which earns little and generates considerable waste. Instead it aims to develop timber processing. The gaboon tree (Aucoumea klaineana), used for making plywood, is an important source of foreign currency. The government also wants the country to grow more food. Meanwhile large rubber plantations are taking hold in the north and the authorities have announced that they want the country to become a leading source of palm oil.

Gabon is, nevertheless, determined to contribute to mitigating climate change. On 31 March it became the first African state to submit pledges in preparation for the UN climate change conference to be held in Paris in November and December. In 2002 Gabon created protected nature reserves – 13 in one go – most of which are woodland and cover 13% of the country. Three, close to Libreville, form what is being developed as an Emerald Arc of green areas.

Lee White has played an important part in this conservation work. “Preserving trees, which soak up carbon dioxide, is the cheapest way of mitigating climate change,” he says. He arrived in Africa 25 years ago to study great apes and now heads ANPN. “Gabon is a Noah’s ark for biodiversity, with forests three million years old,” he says. “The main threat from global warming here is an influx of refugees from the sub-Saharan fringes, who are driven south as the drought worsens in their homeland.”

White says people need more immediate goals if they are to accept the strict rules needed to keep a protected forest in good health. The travel trade should be a source of new jobs, he says, so ANPN needs to become a long-term organisation, commanding public respect, along the same lines as its counterparts in Kenya or Costa Rica, which have succeeded in capitalising on their natural heritage.

The agency needs money to pay forest wardens and provide facilities for visitors. It has drafted a range of plans for suspended walkways, playgrounds, hides for observing wildlife and lodges. “It wouldn’t take much for the whole thing to fall flat on its face. It’s a precarious situation,” says Eric Arnhem, senior technical adviser for the NGO Wildlife Conservation Society in Gabon.

With oil prices plummeting, the worry is that Gabon is cutting back public spending, which directly reduces ANPN’s budget. France, through its overseas development agency AFD, has pledged €11m ($12.4m) to support the Emerald Arc scheme, as part of a €58m ($65.5m) fund for sustainable forest management between now and 2020. In practice the fund works by cancelling some of Gabon’s debt to France.

“People don’t understand why we prevent them from hunting and clearing brush to grow ancestral crops. We have to explain over and over again that this environment protects us from flooding and coastal erosion,” says Ernest Ogandaga, leader of the town council in Akanda, north-east of Libreville. His municipality borders Akanda National Park.

“There used to be a lot of trafficking here,” says Clotaire Moukagni Sika, conservation manager of the Akanda reserve. “Now we monitor the flow of migrants at the same time as poachers.” The biggest challenge, he says, was “uprooting” migrant fishermen from Benin and Nigeria, who pitched camps about 50 years ago at the mouth of the river that runs through the reserve.

They cut down mangroves to smoke their catch, and hunted for monitor lizards and dwarf crocodiles, the latter a protected species. Above all, their nets obstructed the estuary, preventing young fish from reaching the ocean.

The mangroves have since recovered and are now 5km deep. Pelicans, herons and stork have reappeared on the mudflats, but the fishermen have had to move out to the open sea. They complain about the hazards this involves, in particular the threats from unauthorised trawlers. They blame the park for ousting them. But there are other more serious problems. Further down the coast towards Libreville the state of the mangroves deteriorates, with countless plastic bottles and other waste entangled in their roots, a sad reminder of urban degradation.