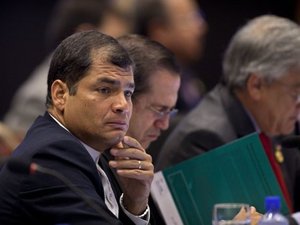 Ecuador's leftist president stormed out of a summit of leaders of Latin America, Spain and Portugal on Saturday, demanding apologies from a World Bank representative.

Leaders from Spanish and Portuguese-speaking nations were wrapping up a two-day event here on how to weather the effects of the global economic slowdown.

President Rafael Correa was visibly upset during a presentation by Pamela Cox, a senior World Bank official for Latin America and the Caribbean.

"In an Ibero-American forum, why do I have to listen to lectures from the World Bank vice president, who openly blackmailed my country?" Correa asked, interrupting Cox.

Correa recalled an incident in 2007, the year he took office, when he kicked out the World Bank's representative in Ecuador after the organization decided to withhold a previously approved $100 million loan.

The move was reprisal for reforming a fund for foreign debt payments, Correa said. The loan had been approved in 2005, when he was finance minister.

"That lady told me: 'We are not going to give you the credit because the policies have changed,'" said Correa, insisting that he did not understand why he had to listen to the "international bureaucrat."

Cox should at least "start by apologizing for the damage done to Latin America and the countries of the planet," Correa said. He then stormed out of the conference hall.

The event host, Paraguayan President Fernando Lugo, tried to downplay the incident. The Ibero-American summit "is an open forum, where people and ideas are heard," he said.

Cox remained silent during Correa's tirade, and when she spoke, she made no reference to the Ecuadoran president.

The Ecuadoran leader was "out of place, out of context," World Bank spokesman Sergio Jellinek later told reporters. "Correa's attack was personal and we lament it very much," he said.

Correa later rejoined the event, and in his presentation again took aim at Cox -- a U.S. citizen -- as well as the Paris-based Organization for Economic Cooperation and Development, which also had a representative at the event.

Absent, however, were the leaders of economic powerhouses Brazil and Argentina, Venezuelan President Hugo Chavez, and several presidents from Central America.

It is also expected to include an appeal for the United States to end its half-century trade embargo against Cuba, and a call for Britain to settle its dispute with Argentina over the Falkand Islands, he said.