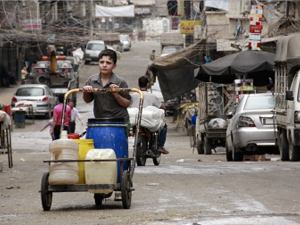 Water supplies across the Middle East will deteriorate over 25 years, threatening economic growth and national security and forcing more people to move to already overcrowded cities, a new analysis suggests.

As the region, which is home to over 350 million people, begins to recover from a series of deadly heatwaves which have seen temperatures rise to record levels for weeks at a time, the World Resources Institute (WRI) claims water shortages were a key factor in the 2011 Syria civil war.

“Drought and water shortages in Syria likely contributed to the unrest that stoked the country’s 2011 civil war. Dwindling water resources and chronic mismanagement forced 1.5 million people, primarily farmers and herders, to lose their livelihoods and leave their land, move to urban areas, and magnify Syria’s general destabilization,” says the report.

New WRI rankings place 14 of the world’s 33 most water-stressed countries in the Middle East and north Africa region (Mena), including Bahrain, Kuwait, Qatar, the United Arab Emirates, Palestine, Israel, Saudi Arabia, Oman, Iran and Lebanon. Companies, farms and residents in these countries are all highly vulnerable to the slightest change in supplies, says the WRI.

“The world’s demand for water is likely to surge in the next few decades. Rapidly growing populations will drive increased consumption by people, farms and companies. More people will move to cities, further straining supplies. An emerging middle class could clamour for more water-intensive food production and electricity generation,” say the authors.

“But it’s not clear where all that water will come from. Climate change is expected to make some areas drier and others wetter. As precipitation extremes increase in some regions, affected communities face greater threats from droughts and floods,” they say.

Areas of China, India, and the U.S., including Ningxia province, and the south-west U.S., could see water stress increase by 40 to 70% by 2040 while Chile, Estonia, Namibia and Botswana all face “especially significant” increase in stress, say the WRI authors.

“Water supplies are limited, and risk from floods and droughts make Botswana and Namibia particularly vulnerable in southern Africa where projected temperature increases are likely to exceed the global average, along with overall drying and increased rainfall variability.”

The Middle East is already prone to water conflict and is likely to remain so, says the report. “Water is a significant dimension of the decades-old conflict between Palestine and Israel. Saudi Arabia’s government said its people will depend entirely on grain imports by 2016, a change from decades of growing all they need, due to fear of water-resource depletion. The US National Intelligence Council wrote that water problems will put key north African and Middle East countries at greater risk of instability and state failure,” says the report.

Middle East water supplies depend heavily on underground aquifers, but these are drying out at alarming rates. The International Institute for Sustainable Development has estimated that the Jordan river may shrink by 80% by 2100 and that ground water supplies will deteriorate further as demand increases. Nonrenewable aquifers are the major source of water in Saudi Arabia.

Satellite images from the Gravity Recovery and Climate Experiment show that the Tigris-Euphrates basin is losing water faster than any other place in the world, except northern India, with the loss of 117m acre-feet of stored freshwater between 2003-2009. Pollution in the Tigris river caused by the discharge of drainage water from agricultural areas and sewage discharge near Baghdad is a major constraint to freshwater availability in Iraq,” says a recent Brookings Institute report.

In the Sana’a basin in Yemen, the groundwater table is falling nearly six metres per year and government has debated moving the capital city.

The report coincides with the northern hemisphere experiencing some of its most extreme heat in decades, adding to water evaporation, affecting crops, increasing demand and drying up supplies.

In Egypt, where demand for water is growing fast as population rises, the country has less water per person each year. According to government statistics the country’s annual water supply dropped to an average of 660 cubic metres a person in 2013, down from over 2,500 cubic metres in 1947.

Water shortages are already common across the region with supplies restricted to only a few hours a day, but this year many smaller cities have run out of water completely.

Israel, Syria , Turkey, Abu Dhabi and many other Mena governments have had to warn people to take extra precautions in the extreme heat that has engulfed cities. Earlier this year hundreds of people in India and Pakistan had died of heat stroke.

“In the past, Algeria usually experienced siroccos – hot blasts of wind from the Sahara – rather than heatwaves. Now we have them at any time of the year with varying intensities. Algeria has experienced over 40 days of heatwave this year,” said Mahi Tabet-Aoul, Algerian atmospheric scientist.

One reason why water is so scarce is because farming wastes so much. In addition, many rich people across the region have dug their own wells to tap into aquifers, leading to over-pumping and pollution of groundwater in cities like Damascus.

Analysts urge the ending of water subsidies for large farms, the raising of energy prices to discourage over-pumping and the use of “smart” irrigation technologies to reduce water loss on farms.