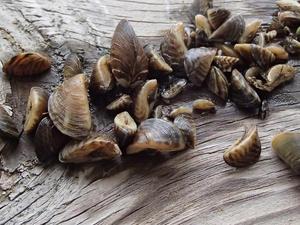 Possibly aided by June's record wet weather, invasive zebra mussels have found their way down the Chesapeake Bay as far as Middle River, not far from Baltimore.

The Maryland Department of Natural Resources announced Wednesday that it had confirmed the presence along the bay's upper western shore of the little brown-striped shellfish that have clogged power plants and drinking water facilities in the Great Lakes region.

Native to the Black, Caspian and Azov seas in Eurasia, zebra mussels first turned up in the Great Lakes in 1988, possibly brought there as hitchhikers in the ballast water of ships. In the years since, they have spread throughout the Midwest and East.

They made their way down the Susquehanna River to its lowest reaches a few years ago. They were found last year to be proliferating on buoys at Havre de Grace and in fishing gear at the head of the bay.

It's not clear how the mussels got to Middle River, but weather is a prime suspect, said Matt Ashton, a DNR biologist. It's possible the animals attached themselves to fishing gear or a boat that wound up in Middle River, he said. But June's downours made the upper bay more hospitable to zebra mussels at about the time they spawn.

Zebra mussels can't tolerate salty water, Ashton explained, but the wettest June on record flushed so much fresh water down the Susquehanna that salinity levels dropped far below normal in July in the bay and the Gunpowder.

That's about when the mussels reproduce, producing tens or even hundreds of thousands of eggs. Their larvae spend about a month in a free-swimming state before attaching themselves, generally to hard surfaces such as piers and navigational buoys, but also to submerged fishing lines and even to grasses growing on the bottom.

"Somehow, larvae or breeding adults have gotten into that area of middle river," Ashton said.

July and August so far have been a little drier than normal, but it's not known yet whether the mussels seen in Middle River and near the mouth of the Gunpowder will survive as salinity levels go back up, the DNR biologist said.

Zebra mussels are prolific filter feeders, and they multiply so rapidly that their colonies have been known to choke off water intakes, forcing utilities into costly cleanouts and preventive measures. Besides their impact on infrastructure, the mussels also can crowd out native mussels and other shellfish, altering the ecosystem.

The invasive animals appear to have limited their spread to the bay's western shore so far. Ashton said none has been reported to date in Back River, just east of Baltimore. A single mussel was found in the lower Sassafras River four years ago, but salinity levels tend to be higher along the upper Eastern Shore, making it less likely they could take hold there.

Even so, with the latest sign of further spread, DNR intends to step up surveillance for zebra mussels now, Ashton said. Biologists will be checking the Sassafras and Chester rivers as well as more of the upper western Shore tributaries.

DNR urges boaters and recreational anglers as well as watermen to take precautions against spreading the mussels. Among the recommended steps: drain all at the end of fishing trips, rinse boats and fishing gear with high-pressure or hot water and let everything dry out two to five days before putting in elsewhere.