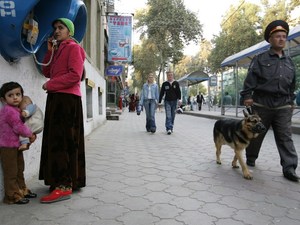 Eight police officers were killed and at least five injured in Tajikistan on Friday in two separate shootouts with armed groups that could have been led by rogue law enforcement agents, police told AFP.

An armed group killed four police in an early morning shootout on the outskirts of the capital Dushanbe, a spokesman for the interior ministry told AFP.

During a separate attack, a further four policemen were killed in a shootout in the town of Vahdat just outside the capital, another police official told AFP on condition of anonymity. At least two militants were also killed.

"In the course of two attacks on Friday morning, eight staff of the interior ministry of Tajikistan were killed," the official told AFP, adding that five were injured in the two incidents.

The official said that the alleged leaders of the armed groups appeared to be officers within police and the armed forces, but would not elaborate.

The violence comes amid growing tensions in the majority-Muslim but secular post-Soviet country of 8 million people over the role of Islam in public life.