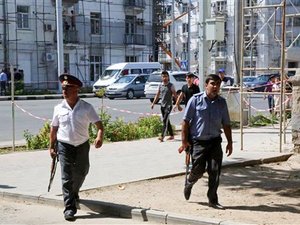 Thirteen militants were killed by government forces in Tajikistan on Saturday, with the rebels refusing to surrender, officials said.

The crackdown followed a day of violence in which nine policemen and another 13 militants were killed in two separate attacks targeting police stations.

"The militants were offered to surrender but they refused," a spokesman for Tajikistan's interior ministry told Agence France Presse.

"The operation of government forces continues," he said of a joint police and army operation taking place on the ground and from the air.

Friday's attacks targeted a police station in the capital, Dushanbe, and another in the town of Vahdat, which lies some 20 kilometers (13 miles) to the east.

The government claims the attacks were orchestrated by former deputy defense minister Abduhalim Nazarzoda, who was dismissed from his position on Friday.

Those killed on Saturday died in a government attack on a remote mountain area some 50 kilometers northeast of Dushanbe, officials said.

Since Friday, more than 500 weapons along with ammunition have been seized from the group, officials said.

Moscow maintains a military base of around 7,000 soldiers in Tajikistan

The Tajik government has said 51-year-old Nazarzoda -- who relieved of his duties on Friday "in connection with a crime" -- fought on the side of the United Tajik Opposition during the five-year civil war (1992-1997).

They did not give details on the alleged offence.

Officials have also said Nazarzoda belongs to the opposition Islamic Renaissance Party of Tajikistan (IRPT) which was effectively closed down by the government last week.

The IRPT has denied Nazarzoda is one of its members.

Nazarzoda, who took up the position of deputy defense minister in January, has worked at the ministry since 1999, when anti-government fighters were integrated into state institutions after the civil war.