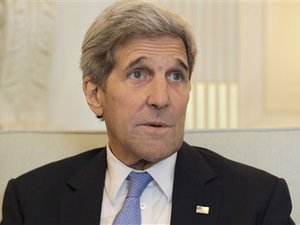 U.S. Secretary of State John Kerry raised U.S. concerns about reports of "an imminent enhanced Russian military buildup" in Syria, in a phone call Saturday to his counterpart in Moscow, the U.S. State Department said.

"The secretary made clear that if such reports were accurate, these actions could further escalate the conflict, lead to greater loss of innocent life, increase refugee flows and risk confrontation with the anti-ISIL coalition operating in Syria," the State Department said.

"The two agreed that discussions on the Syrian conflict would continue in New York later this month," it said.

The New York Times reported that Russia has sent a military advance team to Syria and was taking other steps that Washington fears may signal plans to vastly expand its military support for President Bashar al-Assad.

The Times said the moves included the recent transport of prefabricated housing units for hundreds of people to a Syrian airfield and the delivery of a portable air traffic control station there.

Russia's President Vladimir Putin was asked Friday whether Russia was taking part in military operations against the Islamic State group in Syria.

"We are looking at various options but so far what you are talking about is not on the agenda," he said.

"To say we're ready to do this today -- so far it's premature to talk about this. But we are already giving Syria quite serious help with equipment and training soldiers, with our weapons," RIA Novosti state news agency quoted Putin as saying.

It made no mention of U.S. concerns about a possible Russian military buildup, but said the two discussed "different aspects of the situation in Syria and its environs, as well as the objectives of the fight against IS and other terrorist groups."

Ha ha but it's ok for the US to arm Israel! Jokers.

Putin could care less that the US is "concerned." The Obama administration cannot be taken seriously.