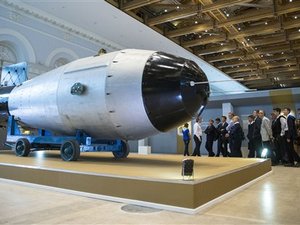 Eight meters long and weighing 25 tonnes, a replica of the so-called Tsar Bomb, the most powerful nuclear bomb ever detonated, has gone on display for the first time in Russia, in the midst of an ongoing standoff with the West over Ukraine.

Tested in 1961 by the Soviet Union, the hydrogen bomb -- also known as the AN602 -- instilled a mix of pride and fear in retired military pilot Nikolay Krylov as he looked at the replica housed at an exhibition center near the Kremlin.

"When I come near it, I'm uncomfortable because I think of all the destruction it could have done," the 62-year-old said.

This symbol of the Cold War nuclear arms race is being showcased to mark 70 years of Russian nuclear history, as the nation's ties with the West remain strained by its 2014 annexation of the Crimea peninsula from Ukraine and its alleged support for separatist rebels.

In May, NATO condemned Russia's "nuclear saber-rattling" after Moscow announced plans to deploy nuclear-capable missiles in Kaliningrad -- its European exclave tucked between Poland and Lithuania -- and Russian President Vladimir Putin said he had been ready to put nuclear forces on alert as the West denounced the seizure of Crimea.

Opened on the first day of the new school year on September 1, the exhibit drew crowds of uniformed students, who clustered around the replica weapon, an uncanny sight for some visitors.

"It would have been better if the bomb had never existed," 72-year-old Galina Ivanova, who worked on Russia's civilian nuclear energy program for more than three decades, told AFP at the exhibition.

"But at the time, the bomb played an important role. It might be the reason why we are still here today," she said.

On October 30, 1961, the nuclear bomb developed by Russian scientists -- including future Nobel Peace Prize winner Andrei Sakharov -- was detonated in the Soviet Union's Novaya Zemlya archipelago above the Arctic circle.

The detonation, which yielded an explosive force of 50 megatons, produced a gigantic fireball visible from hundreds of kilometers away and sent seismic shockwaves through the surrounding area.

Soviet leader Nikita Khrushchev had warned the United States a year earlier, during the 1960 United Nations General Assembly, that the Soviet Union would show them "Kuzkina mat" (Kuzka's mother), a term he used to designate the Tsar Bomb.

The detonation was the result of a wide-ranging atomic research program ordered by Soviet leader Joseph Stalin just before the end of World War II. Its goal: develop the atomic bomb as the United States had.

The Soviet Union and the U.S., who joined together to fight Nazi Germany, became locked in a global struggle for international influence, racing to acquire nuclear warheads despite knowing that any attack would have disastrous consequences for both sides.

"This bomb, the most powerful of its kind, helped countries strive for peace," said Mikhail Bayaskhalanov, a tour guide at the exhibition.

Bayaskhalanov insisted that putting the bomb on display was not "meant to scare anyone."

"Nuclear energy is not only atomic bombs and missiles but also civilian nuclear programs, icebreakers, electricity production, sectors in which Russia has very high performing technologies," he said.