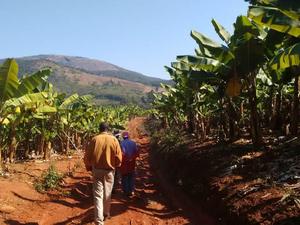 In the eastern highlands of Manicaland province, crudely built wood, mud, and thatch hovels cling perilously to the mountainsides.

The illegal homes, the government says, belong to migrants who have fled drought-prone areas of the province in search of fertile soil and good rains. And they are growing in number every year.

Droughts linked to climate change are rendering Manicaland's western low-lying areas increasingly unsuitable for rain-fed agriculture, experts say. But a stretch of mountains in the province's east, running from Nyanga in the north to Chimanimani in the south, still has flowing rivers and abundant rainfall.

With Zimbabwe's struggling economy making it difficult to find formal employment, the lure of the rich eastern highlands is irresistible to many people.

According to the Ministry of Local Government, Urban and Rural Development, over 20,000 people from the dry regions of districts such as Mutare, Nyanga and Chipinge have moved east, settling on fertile land not designated for human habitation.

Lloyd Muchoko is one of them. Until 2010, he was living in Chitora, an area in the west of Mutare district that has been experiencing recurring droughts for over a decade. Struggling to grow enough maize to support his family, he decided to go to Burma Valley and built an illegal home on government-owned land.

"I had a bumper harvest of maize this season which I could not have obtained had I stayed in the dry area where I used to live," said Muchoko, 32.

But as climate change pushes more and more people to find greener land, residents of Manicaland's lush eastern highlands are calling for government intervention before the situation turns into a crisis.

At a recent meeting of residents of the Mpudzi Resettlement Scheme in Mutare district, it was clear that the fight for fast-dwindling resources was causing tension between formerly landless black farmers settled there as part of Zimbabwe's land redistribution programme, and the new, unplanned arrivals.

"We are sitting on a time bomb," said village elder Nicholas Mukwindidza. "These new settlers are taking over our pastures and they are occupying undesignated areas, too. The government must do something before this escalates to bloody confrontations."

Settlers have moved into grazing land, national parks and areas such as riverbanks and wetlands, residents said.

As well as putting strain on community relations, the mass migration of people into Zimbabwe's eastern highlands is hurting the region's ecosystems, officials say.

In Chimanimani, Vumba and Nyanga, illegal settlers have destroyed more than 30,000 hectares of the country's timber plantations in the past seven years, according to the figures released by the Timber Producers Federation (TPF), which represents private and government-owned timber companies.

The federation and the Ministry of Local Government, Urban and Rural Development blame deforestation and farming by new settlers for causing heavy siltation in various rivers and dams in Burma Valley, resulting in some losing up to half their volume in the dry season.

Without intervention, the region now drawing thousands of families with its plentiful supply of water could soon be facing a drought of its own, they say.

According to predictions by the Ministry of Environment, Water and Climate, rainfall in Zimbabwe could decline by 5 percent to 20 percent by 2050. That, combined with higher populations in Zimbabwe's lush east, could lead to shortages even there, some fear.

"These are the harsh realities of climate change," said Prince Mupazviriho, a ministry permanent secretary.

As part of its work to find a solution to climate change-induced migration, the United Nations Development Programme (UNDP) launched the National Climate Change Response Strategy in February to support initiatives that could benefit up to 10,000 smallholder farmers in three Zimbabwe districts, two of them in Manicaland's dry areas.

The $4 million fund, which runs over four years, will go towards the building and rehabilitation of dams, irrigation schemes, rainwater harvesting and borehole well drilling.

In the meantime, Zimbabwe's government has promised more immediate action. In March, the Minister of State for Manicaland province, Mandi Chimene, told a meeting of timber plantation owners in Mutare that illegal settlers will be evicted. Since then, however, no evictions have taken place, Chimene confirmed.

If the time does come, some settlers say they are ready for a fight.

"We came here because we don't have any other place to go," said maize farmer Muchoko. "And we are here to stay."