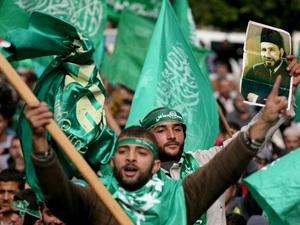 The United States put three senior members of Hamas, a senior commander and two leaders freed by Israel in exchange for captive soldier Gilad Shalit, on its "terror" blacklist Tuesday.

Deif has been described as Israel's most wanted man for his role since 2002 as commander of Hamas' military wing, the Ezzedine al-Qassam Brigades, overseeing attacks in Gaza and Israel.

"He is known for deploying suicide bombers and directing the kidnapping of Israeli soldiers," the State Department said in a statement announcing his new designation.

"During the 2014 conflict between Israel and Hamas, Deif was the mastermind of Hamas' offensive strategy."

As "global terrorists," the three Palestinian figures are subject to the seizure of any assets they hold in areas of U.S. jurisdiction and Americans are forbidden from doing business with them.

Hamas denounced the decision as "immoral and against international law" on its Twitter account, accusing Washington of "backing Israeli terrorism."

Separately, Hamas spokesman Sami Abu Zuhri said blacklisting senior figures would not stop the group "from succeeding in our national duty of protecting our people and liberating Palestine."

The Palestinian Islamist movement, which controls the Gaza Strip enclave, is regarded as a terrorist organization by both the United States and Israel.

The al-Qassam Brigades are Hamas' armed wing and regularly fire rockets into Israel.

Deif, a veteran of the Palestinian struggle, has long been a target for Israeli assassination, and in August last year his wife and son were killed in an air strike.

Sinwar and Mushtaha were named to Hamas political leadership roles in Gaza in 2012, a few months after they were among 1,027 prisoners freed by Israel in exchange for Shalit.