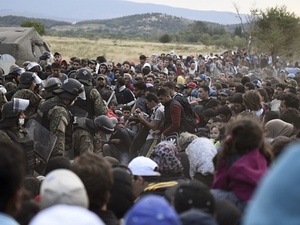 As I looked in on my own children sleeping safely last Thursday night before I went to bed, I did so with added poignancy as I reflected that this was something Abdullah Kurdi was not able to do. I’m sure millions of parents of young children right across Europe have felt similar emotions these last few days.

We’re all human, and so it’s perhaps not surprising that it takes a single photograph and an individual’s story to shake a society, all too belatedly, into glimpsing at one horrific aspect of Europe’s refugee crisis and demanding action.

But if we really want to reduce the future suffering of millions of refugees, and politicians want to avoid more shameful paralysis in the years ahead, we also need to look at the bigger picture.

Armed conflict will always be a risk in a world with oppressive dictators, terrorist groups, ideological extremism, the militarisation of sensitive regions by world powers, and an arms trade on the constant look out for new business. All of these factors, and more, are behind the appalling conflict in Syria, and the reason Europe is now struggling to cope with tens of thousands of refugees.

But it would seem that one of the key triggers for the 2011 Syrian uprising was the 2006 to 2010 drought, the most severe on record in this fertile region, itself probably caused or exacerbated by climate change.

As the abstract of an academic paper published this March in the Proceedings of the National Academy of Sciences puts it: “There is evidence that the 2007−2010 drought contributed to the conflict in Syria. It was the worst drought in the instrumental record, causing widespread crop failure and a mass migration of farming families to urban centres.

“Century-long observed trends … strongly suggest that anthropogenic forcing has increased the probability of severe and persistent droughts in this region. We conclude that human influences on the climate system are implicated in the current Syrian conflict”.

Scientists have similarly suggested that climate change may have played a role in the drought in north Africa that fuelled food price rises ahead of the Arab Spring, while back in 2007, a UN report concluded that climate change and environmental degradation was a key trigger in the conflict in Darfur a few years earlier.

To be clear; there will always be a multitude of drivers behind of social unrest and armed conflict. It would be wrong to say climate change “caused” these conflicts, but equally the evidence suggests it would be wrong to say it didn’t play a contributing role. And, if this is what is possible when average global temperatures have risen less than 1C, then goodness help future generations if/when it reaches 2C, 4C or even 6C.

In these circumstances, mass migration will be occurring in many regions of the world, with or without armed conflict. In 2014, the World Bank reported that climate change is going to lead to far more heat-waves and drought, particularly in the Middle East and North Africa, exacerbating crop failure, food and water shortages, conflict and dislocation of people. Right now, Baghdad has eight extreme heat days a year. With 2C global warming they say there will be 90 extreme heat days. With 4C warming, over 115. It is a similar story for Amman, Damascus, Beirut, Riyadh.

The failure of the global community, and principally the rich countries, to tackle climate change means we are still on trajectory to these sort of temperatures.

This is why climate adaptation – action to reduce the vulnerability of ecological, social and economic systems to adverse effects of climate change – is now such a hot topic in the international climate talks. This is also why the countries that will suffer the worst impacts of climate change (predominantly the poorer countries) are quite rightly demanding at least $200bn a year in new and additional public finance from richer countries to help adapt.

But with or without climate adaption schemes, it would be naïve in the extreme to assume millions of people suffering the worst effects of climate change aren’t going to want to move, and morally bankrupt to deny them this possibility if they’ve contributed next to nothing to the causes. Throw armed conflict back into the mix, and the problems currently being experienced in Budapest or Calais are far from the full extent of the problem.

There are no simple solutions, but rich countries should be providing the financing and other assistance right now to help vulnerable countries and communities adapt to climate change while doing much more to cut greenhouse emissions, by investing in energy efficiency and clean energy, and leaving fossil fuels in the ground.

Sadly, in the past few months, the UK government has moved in the wrong direction as it’s torn up a long list of climate policies that have been put in place over many years, while at the same time championing brand new fossil fuel infrastructure in the form of fracking.

People from across the political spectrum have come together in the last week to demand a much stronger response from David Cameron to the refugee crisis, and rightly so.

But if the government continues to move backwards on climate change, then we should get ready for a much bigger refugee crisis before very long.