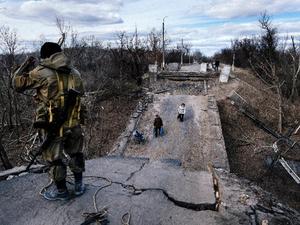 Ukraine's army said on Wednesday that a new nine-day truce with pro-Russian insurgents was holdings despite small skirmishes that claimed the lives of two government soldiers this week.

"On average, the rebels violate the ceasefire 10 times a day, but they no longer use heavy weapons."

Lysenko said the insurgents staged a raid in the eastern separatist province of Lugansk that was repelled in a 30-minute gun battle in which one government soldier.

Another Ukrainian serviceman was reported killed on Tuesday.

The militia command reported no casualties from the mostly Russian-speaking industrial war zone.

The bitter foes agreed on September 1 to more strictly respect an often-broken February armistice that was meant to end fighting quickly and settle all political disputes by the end of the year.

But a new round of talks in the Belarussian capital Minsk on Tuesday made no reported progress toward a deal that would see both armies withdraw their smaller weapons from the 500-kilometre (310-mile) demilitarisation zone.

Rebel command said it expected a special security task force representing the warring sides and Russia to continue with the negotiations with the help of European mediation on Wednesday.

The United Nations estimated on Tuesday that the 17-month conflict on the European Union's eastern frontier has claimed the lives of nearly 8,000 people and injured almost 18,000 -- most of them civilians.

Repeated efforts to stop the 17-month conflict have been frustrated by some rebel and government units' refusal to listen to their political leaders and the high level of mistrust between Moscow and Kiev.

Russia denies accusations by Ukraine and its allies of orchestrating and supporting the conflict to try to prevent Ukraine from joining the European Union and possibly NATO at a later date.

The February pact offers the militia broader autonomy but requires them to cede control of their parts of the Russian-Ukrainian border to Kiev's troops.

The slow pace of negotiations has seen the separatists request a deadline extension that would see all peace terms implemented by the start of 2017.

Ukraine insists that it must seize back full control of its Russian border within the next four months.