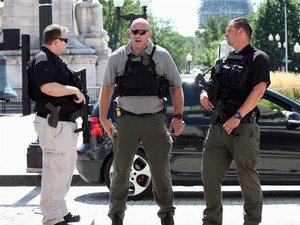 Panicked passengers fled Washington's main train station Friday after a security officer shot a man who had stabbed a woman, in what police said appeared to be a domestic incident.

The incident -- which sparked a brief panic at Union Station -- came on the 14th anniversary of the 9/11 attacks, when U.S. authorities are on high alert, especially across the capital city.

Police commander Jeff Brown told reporters that the suspect apparently stabbed the woman at the entrance to an adjacent building, and was then chased into the station by an armed security officer from the adjacent Securities and Exchange Commission.

The officer fired one round when the suspect refused to surrender his weapon and lunged toward him. The suspect was hit in the side, and his injuries -- along with those of the woman -- were not life-threatening, he said.

Both were being treated at area hospitals.

Tony Denniston, who was waiting to take a train to Connecticut, told AFP that he was about 50 feet (15 meters) away from where the shooting occurred.

Denniston said he saw the officer open fire on a man at a McDonald's in the station, which is located near passenger boarding areas.

Polly Hanson, chief of Amtrak police, said people in the station "self-evacuated" when the shot was fired.

Hanson noted that extra security personnel were in the station "in a surge capacity" because of the September 11 anniversary.