The Simple Statistic that Perfectly Captures what Climate Change Means 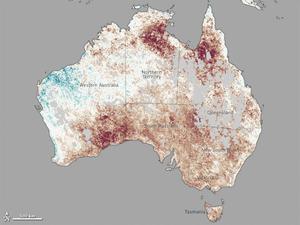 There are many ways to measure the world’s changing climate. You can chart rising global temperatures, rising sea levels and melting ice. What’s tougher, though, is to find a measurement that easily relates all of that to what people experience in their daily lives.

In a new study in Geophysical Research Letters, however, two Australian researchers do just this by examining a simple but telling meteorological metric — the ratio of new hot temperature records set in the country to new cold temperature records.

“In a stationary climate, a climate where we don’t have any trend or long-term change, we expect hot and cold records to be broken at almost the same rate,” explains Sophie Lewis, the lead study author and a researcher at the Australian National University in Canberra. “But in the last 15 years, we see a dramatic increase in the frequency of hot records and the decrease of cold records.”

Australia has warmed nearly 1 degree Celsius since 1910, and has experienced plenty of extreme heat recently, especially during the famous “angry summer” of 2012-2013. In particular, the year 2013 broke all manner of country-wide temperature records: “hottest day, week, month, and season observed, and it was the warmest year on record,” note Lewis and her co-author, Andrew King of the University of Melbourne.

So how unusual was this? And would it be likely to happen in a climate unperturbed by human greenhouse gas emissions?

Lewis and King looked at how often Australia set hot and cold temperature records from the year 1910 through 2014. They only considered temperature records across the country as a whole and in each of its states or territories (except Tasmania), and only examined monthly, seasonal and annual records. Thus, the study did not examine daily records or records in individual locations. (This was in part to avoid problems introduced by the fact that over time, the number of individual temperature recording stations changes.)

“Over this last period, the probability of cold record-breaking is generally low and the number of new cold temperature records set approaches zero,” the study observes. It’s hard to imagine why you would get such a striking result if not for a changing climate.

Indeed, as one 2012 study put it, “If the average temperature rises, then obviously so will the number of heat records, all else remaining equal.”

The new finding is similar to — but more dramatic than — a 2009 study that found that hot records outpaced cold records by a ratio of roughly 2 to 1 in the United States in the 2000s. That study also forecast that the gap between hot and cold records should widen as climate change continues.

Indeed, Lewis underscores that while the ratio was particularly dramatic after 2000, “This isn’t a result of only a few years; this is a trend since 1960.”

The new study also used climate modeling experiments to examine whether the skewed pattern of broken temperature records was recapitulated when the simulation did, and did not, include human-induced greenhouse gases. Only in the first case did the model produce a trend toward more hot record-breaking than cold record-breaking.

“In the anthropogenically forced case, the average number of hot records increases through time, while the number of cold records concomitantly decreases,” the modeling result found.

“The recent rate of hot record-breaking dramatically exceeds that expected in a stationary climate,” the paper concludes.

“There’s a lot of rhetoric in Australia that new hot records don’t mean anything, [that] it just means we’ve been keeping records for longer,” says Lewis. “So it was important for us to clear up that this large increase in the number of hot records is related to the greenhouse gases.”