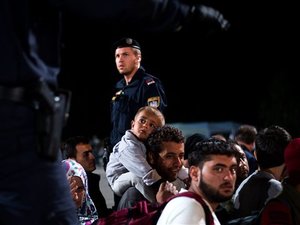 Several dozen migrants entered Croatia from Serbia early Wednesday, the first to enter the EU country after Hungary sealed its borders to thousand of people entering every day, an AFP correspondent saw.

The group of mostly Syrian or Afghan men, women and children crossed the border -- which was marked by nothing more than a stone -- early Wednesday morning and were picked up by police as they walked across a field.

From there they were taken to a police station in the nearby town of Tovarnik to be registered, police said, and tended to by medical staff.

Police said initially that a group of around 20 people entered the country. They said that other groups of similar sizes were on their way.

Until this week, the vast majority of migrants and refugees travelled up from Greece, through Macedonia and Serbia into Hungary. From there they travelled onwards to western Europe, particularly Germany and Sweden, via Austria.

But Hungary, which has seen more than 200,000 migrants enter this year, on Monday and Tuesday effectively sealed its southern border with Serbia by closing off a railway line where many entered with a waggon and barbed wire.

Hungary directed the migrants to official border crossing points but after some were allowed through these too blocked.

Any entering Hungary illegally were liable to arrest and several years in prison under new laws rushed through parliament by Prime Minister Viktor Orban's government last week that came into effect on Tuesday.

The effect was plain to see in numbers released by Hungarian police on Wednesday, with the number of people intercepted falling to just 367 from a record 9,380 the day before.

From Croatia, which is in the Europe Union but unlike Hungary not in the passport-free Schengen Zone, the migrants could then enter Schengen member Slovenia, or Hungary.

Good luck to Croatia with them.