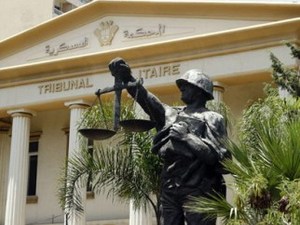 The military court approved on Tuesday the release of nine people, including minors, arrested during recent protests held in downtown Beirut on rioting charges.

Lawyers had filed a request for setting free 16 of the detainees but the tribunal decided to release only nine of them.

The decision came following a pledge made by Military Prosecutor Judge Saqr Saqr to take action.

The meeting between Saqr and a delegation from the families of the so-called August 29 detainees took place after the relatives blocked the road near the military court that lies in the Beirut Museum area, calling for the release of their loved ones.

On Tuesday, the families blocked a vital road outside the Interior Ministry in Sanayeh area.

The detainees include at least seven minors. Rights activists say their detention is illegal.

Demonstrations organized by "You Stink" movement and other groups have escalated over the past weeks, peaking on August 29 when tens of thousands flooded downtown Beirut's Martyrs Square in a rare display of non-partisan mobilization.

The protest movement began in July when the Naameh landfill, Lebanon's largest, was closed and pungent garbage started piling up in Beirut and Mount Lebanon.