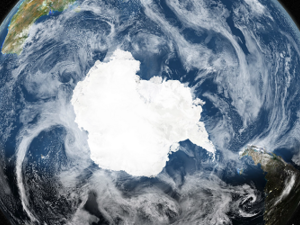 The Southern Ocean, which acts as one of the natural world’s most effective sponges for absorbing carbon dioxide, is showing signs of an unexpected revival in its ability to do so, according to scientists.

The oceans absorb around a quarter of emissions caused by human activities, such as the burning of fossil fuels, reducing the speed of climate change. About 40% of this occurs in the Southern Ocean, which surrounds the Antarctic, making it the planet’s strongest ocean carbon sink.

The researchers said the new findings are surprising and remarkable.

Earlier studies had suggested that rising emissions caused by humans had brought about the saturation of the Southern Ocean in the 1980s. Researchers estimated that the efficiency of the Southern Ocean to absorb CO2 had dropped by about 30% which they put down to higher wind speeds across the area which brought carbon-rich waters to the surface. This was itself a consequence of climate change and the depletion of the ozone layer, they said, creating a feedback loop that would only get worse over time.

But the new report published in the journal Science shows that this downward trend in capacity reversed around 2002 and regained its former strength in line with rising emissions by 2012. The scientists put the change down to a combination of dropping water surface temperatures in the Pacific sector and a change in ocean circulation keeping carbon rich waters below those at the surface.

Prof Nicolas Gruber, lead author and environmental physicist, told the Guardian: “A strong carbon sink in the Southern Ocean helps to mitigate climate change for the moment, as otherwise even more CO2 would have stayed in the atmosphere, but we cannot conclude that this will continue for ever. One has to recognise that despite this remarkable increase in the Southern Ocean carbon sink, emissions have gone up even more.”

The international team analysed measurements of CO2 in surface waters over a 30-year period from 1982. They compared this data with atmospheric CO2 measurements and satellite observations.

Gruber said the report did not contradict the findings of earlier studies but did challenge the conclusions drawn from them, arguing that previous research had been largely dependent on models, rather than observations.

“The models don’t do a particularly good job in modelling the Southern Ocean so I would say this is much much stronger evidence. It is crucial that we continue to make these observations and analyse them to detect further changes in the uptake.”

The research team say that it indicates that the ocean’s potential to absorb CO2 fluctuates more over time than previously thought. Scientists have cautioned that future trends cannot be predicted reliably.

Toby Tyrrell, professor in earth system science in ocean and earth science at the University of Southampton said: “This announcement is good news, on the face of it, because we want this enormous carbon sink to keep working efficiently. It is not any reason to be complacent, however, because we still understand rather little about the internal workings of the Southern Ocean carbon cycle. For this reason we cannot be sure how resilient the Southern Ocean carbon sink will be in the future.”

Although the ocean acifidication caused by the absorption of CO2 has been shown to pose serious consequences for marine ecology, Tyrrell said such conclusions could not be drawn in relation to the new study. “This extra carbon is unlikely to pose a large threat to life through ocean acidification. Most of the carbon taken up in the Southern Ocean is transported shortly afterwards to the deep ocean, where fewer organisms live,” he said.