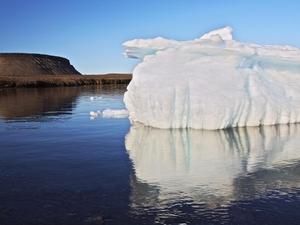 Two new studies are adding to concerns about one of the most troubling scenarios for future climate change: the possibility that global warming could slow or shut down the Atlantic’s great ocean circulation systems, with dramatic implications for North America and Europe.

The research, by separate teams of scientists, bolsters predictions of disruptions to global ocean currents — such as the Gulf Stream — that transfer tropical warmth from the equator to northern latitudes, as well as a larger conveyor system that cycles colder water into the ocean’s depths. Both systems help ensure relatively mild conditions in parts of Northern Europe that would otherwise be much colder.

The papers offer new insight into how rapidly melting Arctic ice could slow or even temporarily halt the ocean’s normal circulation, with possible effects ranging from plunging temperatures in northern latitudes to centuries-long droughts in Southeast Asia. A fictional version of this scenario was depicted in the 2004 disaster film “Day After Tomorrow,” although most scientists believe the movie’s vision of ice sheets over New York and Europe are highly unlikely.

Their report, in the journal Geophysical Research Letters, says previous research may have underestimated changes to the ocean from the huge influx of fresh, cold water from melting ice sheets. Using new methods, the German scientists were able to estimate more precisely how much ice would melt and how all that added freshwater would affect ocean circulation. In the ocean, colder water normally tends to sink, but cold freshwater — less dense than saltwater — stays near the surface, disrupting the normal flow.

“Previous studies have generally had to estimate the amount of melting and then insert the meltwater into the ocean simulation by hand, or haven’t included the feedback between ice sheet melting and ocean salinity at all,” lead scientist Paul Gierz said.

The team’s computer models projected a drop in ocean salinity of about 7 percent in the areas near Greenland’s melting ice sheets, a decline that would alter deep-ocean circulation patterns over time, resulting in “less heat being transported to the high latitudes … which has implications for both North American as well as European weather and climate,” Gierz said.

Because the climate systems tend to respond slowly to environmental changes, the full impacts may not be felt for decades.

“Even if we shut off all greenhouse-gas emissions tomorrow morning, the climate system would continue to adapt to the already incurred perturbations,” he said. “However, the more we — as a society — do proactively right now, the less we will have to do reactively later on.”

A second paper, by a team of Texas scientists, sheds new light on how the Earth’s climate responded during a similar thaw from the planet’s geological past. About 12,000 years ago, rising temperatures at the end of the last ice age released huge volumes of cold freshwater, disrupting the ocean’s circulation systems and sending parts of the Northern Hemisphere back in to the freezer. Scientists refer to the era as the Younger Dryas period.

The study in the journal Nature Communications found a wide range of impacts, some of which lingered for centuries. While the far-northern latitudes experienced rapid changes — including an 18-degree Fahrenheit temperature drop in Greenland in less than a decade — droughts and other weather anomalies in the southern Pacific persisted for 1,000 years.

“A slowdown of the ocean circulation is a double-edged sword,” said Jud Partin, the lead author and a research associate at the University of Texas Institute of Geophysics. “If we see some temperature changes associated with it … and somehow are quick to act and alleviate the change, then we have the potential to stop it.”