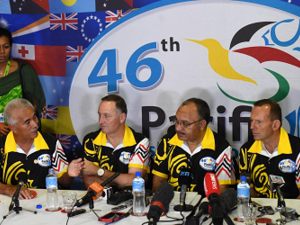 Pacific islands nations failed to convince Australia and New Zealand to back stronger targets on limiting global warming as the showdown at the Pacific Islands Forum on Thursday ended in a stalemate.

The 16 leaders at the forum agreed to disagree on whether to take a two degree or 1.5 degree warming limit stance to UN talks in Paris in December.

But the Australian prime Minister Tony Abbott and NZ counterpart John Key refused to give ground during the “robust” discussions at the nine hour meeting.

The pair were seen celebrating the result over beers at the Grand Papua Hotel bar after the press conference.

That point was echoed in a forum sub-group of six small island states earlier this week.

Pacific islands will send ministers to NZ to learn more about how it works in coming months.

At the moment fishing vessels pay a daily fee to catch as many fish as they like, which might not

be sustainable in the long term.

Abbott returned to Canberra overnight, but other leaders are staying on for talks with non-forum member countries such as the US and Indonesia on Friday.

Jakarta will no doubt be keen to weigh in on the forum’s stance on human rights abuses in its Papua provinces.

The leaders want to send in a fact-finding mission, but insist they respect Indonesia’s sovereignty.