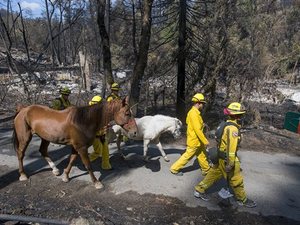 The death toll from monster wildfires raging in northern California has risen to five with the discovery of two new victims, authorities said on Thursday.

Both were killed in the so-called Valley fire, one of two giant blazes that have destroyed hundreds of homes and displaced thousands in the drought-stricken state.

Police located their remains while searching the burn zone with sniffer dogs on Wednesday morning.

"Human remains were located in the Hidden Valley area and the Anderson Springs area," Steven Brooks, spokesman for the sheriff of Lake County, said in a statement.

The remains are presumed to be those of Bruce Beven Burns, reported missing on Tuesday, and Leonard Neft, who has been missing since Monday.

"Identification of the decedents is being withheld until positive identification can be made," the statement added.

Three people were previously known to have died in the Valley and Butte wildfires. All were found in their homes, two in the Sierra Nevada Foothills and a third in Lake County.

Some 17,000 people are still unable to return to their homes as 13,000 firefighters battle blazes across the state, according to Lynnette Round, a spokeswoman with the California Department of Forestry and Fire Protection (CalFire).

The Valley fire, described as one of the most destructive to hit the western United States, has charred 73,700 acres (30,000 hectares) -- an area three times the size of Paris. It has destroyed 585 homes and hundreds of other structures.

The Butte fire has burned through about 70,760 acres, wrecking 450 buildings, including residences and commercial structures.

Authorities are still investigating what could have triggered the Butte blaze, with one possible explanation being a falling tree that took down a power line, CalFire's spokeswoman said.

The deadliest fire in California's history dates back to October 1991. Dubbed the Tunnel fire, it killed 25 people and wiped out 2,900 structures. In terms of land burned, the 2003 Cedar fire holds the record with more than 273,000 acres destroyed.

Eight major fires are currently burning in California, with close to 30 ablaze across the country including in the states of Washington, Oregon, Utah, Montana and Florida.