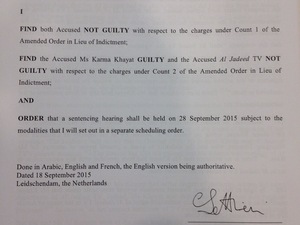 The Special Tribunal for Lebanon on Friday found Karma Khayat guilty for the obstruction of justice by not abiding by calls to stop the publication of names of so-called witnesses in the trial of former Premier Rafik Hariri.

Contempt Judge Nicola Lettieri found both Khayat and Al-Jadeed S.A.L. “not guilty with respect to the charges under count 1 of the order in lieu of indictment,” said the court.

The first count includes diffusing information that undermines public confidence in the court's ability to protect the confidentiality of information about, or provided by, witnesses or potential witnesses.

But Lettieri found Khayat guilty and Al Jadeed S.A.L. not guilty with respect to the charges under count 2, meaning for failing to remove the information on the alleged witnesses from Al Jadeed TV’s website and YouTube channel despite an order by the STL Pre-Trial Judge to do so.

Around 40 diplomats, journalists and others attended the public judgment hearing at the STL headquarters in The Hague.

Lebanon's Charge d'Affaires and diplomats from the Tunisian, Egyptian and South Korean missions in the Netherlands were among them.

After the verdict, Khayat addressed the court, saying “we will not stop from carrying out our duties and revealing your mistakes.”

Khayat's lawyer Karim Khan said prosecutors were "shooting the messenger" because Al-Jadeed was not responsible for any leaks of the witnesses' identities.

Khan told journalists even though he was satisfied that Al-Jadeed was acquitted, he would appeal the judgement against Khayat.

"The battle goes on. We have good grounds of appeal," said the lawyer.

The defense will have 15 days to appeal the verdict after the pronouncement of the sentence. If it doesn't make an appeal by then, the STL will impose a fine of up to 100,000 euros or issue a maximum seven-year jail sentence against Khayat.

The judge set the date for the sentence on September 28.

In case of an appeal, the court will re-convene to study the case.

Khayat and Al-Jadeed were charged with two counts of contempt and obstruction of justice under rule 60 of the Tribunal’s Rules of Procedure and Evidence.

Twelve witnesses have made testimonies during the trial that spanned from April till June.

In April 2013, a list of 167 names of so-called witnesses for the trial of Hariri was published by a previously unknown group identified as "Journalists for the Truth."

The group said it wanted to "unveil the corruption" of the STL.

Set up in 2007, the STL is the only international ad hoc tribunal with the jurisdiction to try an act of terror, specifically dealing with Hariri's death.

Hariri and 22 others, including a suspected suicide bomber, died in a massive car bomb blast on the Beirut waterfront on February 14, 2005.

exactly!
well cooked no need to add anything else
Bravo

Execute her without mercy

@mashnoo2.brazerz
did you just slam Berri, are you flamethrower?

@southern
our politicians are doing a very good job in wasting our money. that is an integral part of it

it is great to see you fluently attacking the STL

but southern you live in Detroit and work at the local grocery shop. Why would that affect you?

L
Do you know anything about the freedom of expression? I believe it does exist even in The Netherlands

Mish coolmec
I am no hizbullah supporter by all means I am certainly opposed to it just as I am opposed to ALL M 8 and M14, as I think they have ALL pushed this beautiful country to its demise. Nevertheless I am a strong believer and supporter of the freedom of expression

dear coolmec
You believe in freedom of expression just like hezbollah when they burned down the same TV station Al Jadeed they now claim to protect because it criticized Nassrallah.

Southern
I am in Beirut now visiting and I got accustomed to power outage like 3 hours per day. But now they are cutting power like 4 times a day intermittently. Why do I have the feeling they are doing it on purpose just to little will and resistance the poor Lebanese people ss\till hav\s?

What about who in the STL originally leaked the names? Seems like this is who they should be looking for, instead of harassing the press and trying to intimidate it

you call that a legal opinion, mowaten?

mowaten, I am not sure about your legal background but you seem to be a lousy lawyer.

I want to know who pays you mowaten to post and for what exact purpose. I see you on every article! Who pays for your internet quota? I demand answers and quickly!

Mowaten is the modern day version of Joseph Goebbel.
if you don't know who I mean ..you should !

didn't your resistance torch the AL Jadeed for speaking something about your leader in the form of freedom of expression?

mowaten, flamethrower, the_roar, mystic, abbas, southern, megahabib, are all legitimate accounts belonging to 7 different persons but who coincidentally always post within the same minute. The only troll here is Mowaten.

I disowned him a longtime ago. He was always a problem child. We tried our best to raise him up as a Lebanese but he always aspired to be Iranian. I recall when he was a baby…. his first words out of his mouth were not Mama or Baba or Ughha …… but Aya-tollah ! He would wake up in the middle of the night and ask his mother when the Ayatollah would come take him to Qom. In the end, we surrendered to God’s will and accepted things as they were. Child psychologists informed us he will grow up to be the most sectarian creature. Well, it seems they were right.

do you have anything against freedom of expression?

The STL has always been been nothing more than a theater show.

until when will you continue to deny it is a martyred iranian jihadi terrorist family in your avatar?

when Mustafa, the younger son of Mughliyyeh, is martyred (God Forbid) will you amend your avatar and make it an all inclusive family portrait?

Thank you .Southern_. for always standing up and fighting for the truth.

Hello lebjack
I like to introduce myself. I am a very close friend of mowaten. I post, vote, and mass report on his behalf whenever he asks me to. If you have any questions regarding this matter, please contact mowaten directly. I have no further questions for you.

I the virus at which Lebanese excel the most i.e. corruption has reached the STL in the Netherland

ya southern
why are you surprised?

who cares about your opinion southern, no one;)

sorry but I do!

This used to be a nice forum where you could actually discuss issues. Now it's just spam bots calling others trolls.
Milk is not always white

hello @terrorist
I like to introduce myself. I am a very close friend of flamethrower. I post, vote, and mass report on his behalf whenever he asks me to. If you have any questions regarding this matter, please contact flamethrower directly. Now, I have a very simple question for you: Do you know why my friend flamethrower was banned and treated like a diseased leper?

you all are have missed the main point!
the STL has cost lebanon 120 million dollars so far!
That money could have been used for real good, not wasted on a bunch of europeans!

We are collecting money to buy her a better attorney at law. Her current one couldn't afford traveling to Holland so he Skyped with the magistrate.the judge and jury weren't impressed at all... Hence the light sentence. We want her to appeal and get a tougher sanction so we're looking for an affordable attorney who graduated from Qom International University.

We accept all donations, even blood and drug money. You may also send your moral support to #SaveKarma #Houthian4President; and pecuniary support should be addressed to the the Syrian presidential palace in Damascus or to Supreme Leader's office in Teheran because The Sayed Nasrala is a nomad with no permanent address.

All addresses are available on Google.

Car steeling is nothing compared to killing humans in Syria I guess Kaptagon, Hashish, other drugs, even their plans to control the Lebanese life is shadowed by human killing machine that we sow in May 7 and is very clear Syria. Pakestani Afghani Lebanese Iraqis all being financed to do the war to control.