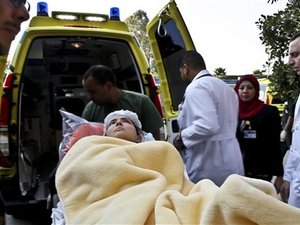 On stretchers and in wheelchairs, six Mexican tourists hurt in a mistaken Egyptian air strike that killed eight others returned home Friday, as Mexico pressed for compensation for the victims.

President Enrique Pena Nieto visited the five women and one man at a public hospital in Mexico city hours after they returned on the presidential plane with the country's foreign minister.

Pena Nieto told reporters that he assured the patients that his government would "accompany them in this legal process" to obtain compensation for the attack.

In the morning, the wounded arrived in Mexico City accompanied by Foreign Minister Claudia Ruiz Massieu, who had flown to Cairo earlier in the week to demand answers from Egyptian authorities.

Four of the wounded were brought off the plane on stretchers, one draped in the green, white and red flag of Mexico. Two others came out in wheelchairs.

The wounded, who are all in stable condition, were taken to the National Rehabilitation Institute in a police helicopter.

Ruiz Massieu said the victims should be compensated "according to international rights" for what she branded an "unjustified aggression."

She said a foreign ministry legal advisor was reviewing options.

- 'Raw' moment - Sunday's attack has angered the Mexican government, which has demanded an exhaustive and transparent investigation that Cairo promised to conduct.

Eight Mexican tourists and four Egyptians were killed when they came under fire during a lunch break on their way to the Bahariya Oasis in the Western Desert. Ten people were wounded, including the six Mexicans.

Survivors have told Mexican diplomats that they came under fire from a plane and helicopters.

Egypt said the tourists had entered a restricted area and were "mistakenly" killed as security forces chased jihadists who had abducted and beheaded an Egyptian.

Pena Nieto said one of the survivors, Juan Pablo Garcia Chavez, described the attack to him.

"It was very raw, a very difficult moment," Pena Nieto said, without providing more details. He met privately with the wounded, out of camera view.

Juan Pablo's brother, Luis Andres, said his sibling's right leg was badly hurt. He had burns and shrapnel wounds in different parts of his body.

"But it was not much given the size of the attack," Andres told AFP.

Another survivor, Carmen Susana Calderon Gallegos, told El Universal newspaper this week that the air strike lasted three hours and that the tourist convoy was bombarded about five times.

Her husband of 20 years, Luis Barajas, died in the attack.

Most of the tourists were from the western state of Jalisco. The dead included a shaman, a modeling agent and a hospital equipment salesman.

Pena Nieto, who also met families of the dead at his official residence, said the bodies had to stay in Egypt due to the investigation and that they would be repatriated next week.

The foreign ministry issued a new travel alert for Egypt, recommending that Mexicans "reconsider or postpone" plans to go there "due to political and social instability, as well as the threat of terrorist attacks or actions by the armed forces to confront them."