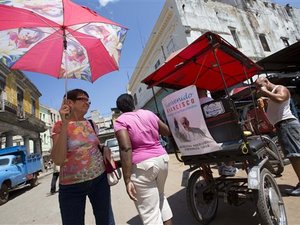 President Barack Obama and Cuban President Raul Castro had a rare phone call Friday ahead of Pope Francis' impending visit to both their nations.

The White House said Obama and Castro commended the pope's role in "advancing relations between our countries." Francis was instrumental in the secret talks that led to a thaw in relations between the Cold War foes, even offering the Vatican as a neutral location for negotiations.

Francis' visit to the U.S. and Cuba comes as the two countries painstakingly work to normalize relations after a half-century diplomatic freeze. Earlier on Friday, the U.S. eased rules for citizens wishing to travel to Cuba or do business with its growing ranks of independent entrepreneurs, a step aimed at kindling greater economic freedom on the island.

The Treasury and Commerce departments said the regulations that take effect Monday simplify procedures for tourism, telephone and Internet investments, and money transfers to Cuba.

Even as the U.S. and Cuba move forward on easing tensions, deep differences remain. Cuba wants the U.S. to fully lift its economic embargo on the communist island, a step the Republican-controlled Congress opposes. The U.S. also has concerns about Cuba's human rights record and detainment of political prisoners.

"The leaders discussed steps that the United States and Cuba can take, together and individually, to advance bilateral cooperation, even as we will continue to have differences on important issues and will address those differences candidly," the White House said.

Francis is due to arrive in Cuba on Saturday. He'll then travel to the U.S. for a multi-city visit, including a White House meeting with Obama.

Obama and Castro first spoke in December after the secret process to restore diplomatic relations was revealed. They also met in person earlier this year during a regional summit in Panama.