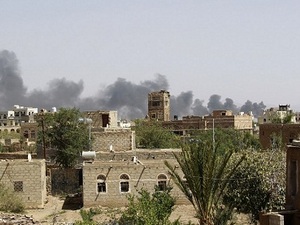 Air raids by Saudi-led coalition warplanes killed 15 people in Yemen's capital in one of the heaviest nights of bombardment in months, aid workers and witnesses said Saturday.

One rescuer told AFP at least 10 civilians were among the dead.

"Ten members of the same family were killed in the Al-Falihi neighborhood, in Sanaa's old town," he said.

Residents said four houses were destroyed by a bomb and that 15 other buildings were damaged.

Witnesses said five Huthi rebels were killed in a raid on their position in the capital, which the Iran-backed Shiite fighters seized last year.

A Saudi-led coalition has conducted air strikes on rebel positions across Yemen since March and has provided troops, training and heavy weapons to forces seeking to reinstate exiled President Abedrabbo Mansour Hadi.

A residence of ousted president Ali Abdullah Saleh, whose forces have allied with the Huthis, was also bombed, as well as an office of his political party, according to residents.

In central Zubeiri Street, an army communications office was hit for the first time by the coalition.

The building has been used by the pro-Huthi Saba news agency, as well as other media outlets, according to a rebel spokesman.

In the southern neighbourhood of Hadda, the Omani ambassador's residence was hit during an air strike targeting the nearby home of a Huthi official, residents said.

A spokesman from Oman's foreign ministry condemned the attack, the ONA news agency reported, without saying whether the envoy was at home at the time.

"Oman calls on the United Nations to take all measures to end the war in Yemen," the spokesman said.

Oman, the only Gulf state that does not belong to the coalition, has offered to host planned U.N.-mediated peace talks between the government and rebels.

The government earlier this week said it would not attend talks unless the rebels first accept a U.N. Security Council resolution demanding their withdrawal from territory they have captured.

The insurgents still control Sanaa but have lost ground in the south since July when the coalition sent in armour, troops and Yemeni fighters trained in Saudi Arabia

Riyadh formed the alliance in response to fears the Huthis would take over all of Yemen and move it into the orbit of Sunni Saudi Arabia's Shiite regional rival Iran.

An analyst estimates the coalition has more than 5,000 troops in Yemen, supporting local forces.

The Marib offensive began after an early-September missile strike on a coalition base in the province killed 67 coalition soldiers, including 52 from the United Arab Emirates.

The United Nations says nearly 4,900 people have been killed since late March in Yemen, where the U.N. aid chief has called the scale of human suffering "almost incomprehensible."