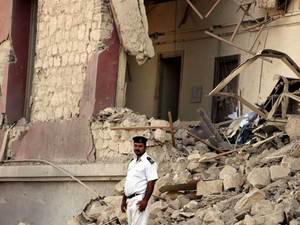 An Egypt-based affiliate of the Islamic State group has claimed responsibility for a bomb attack in the capital, Cairo, which wounded two people.

The explosion happened near a building with administrative offices for Egypt's Ministry of Foreign Affairs and caused minor damage to the structure. Egypt's state news agency MENA said the two injured people were rushed to a nearby hospital.

Last month in Cairo, a car bomb claimed by Islamic State militants ripped into a national security building in a residential neighborhood, wounding at least 29 people.