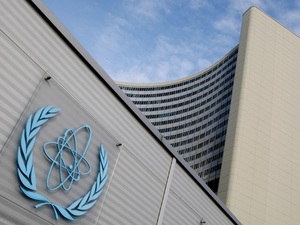 Iran said Monday it independently collected samples at a suspect military site where illicit nuclear work is alleged to have occurred and later handed them to the U.N.'s absent inspectors.

The disclosure that international monitors were not physically present is likely to feed critics of a nuclear deal between Iran and world powers, who have poured scorn on measures used to check if Tehran's atomic program is peaceful.

In a mark of the high stakes at play it drew a quick reaction from the U.N.'s International Atomic Energy Agency, whose chief insisted that "the integrity of the sampling process and the authenticity of the samples" was not compromised.

The samples were taken under "established procedures", IAEA director general Yukiya Amano said, noting "significant progress" is being made in its long-running probe of whether Iran ever sought to develop a nuclear bomb.

The site at Parchin, east of the capital Tehran, has been at the center of international skepticism of Iran's activities, specifically that as late as 2003 it carried out work there aimed at developing an atomic weapon.

Iran says accusations from Western intelligence agencies -- including that it conducted explosives tests at Parchin -- are groundless and based on malicious information provided by its enemies.

The sample taking is linked to a so-called roadmap with a December 15 deadline by when the IAEA says ambiguities about past possible military dimensions of Iran's nuclear activities must be resolved.

Much work remains to be done on that report, Amano said.

Iran's environmental sampling from specific parts of the Parchin complex took place in the past week.

"It was done by Iranian experts, in the absence of IAEA inspectors," said Behrouz Kamalvandi, spokesman for Iran's Atomic Energy Organization.

IAEA and Iranian officials have previously said monitoring can be verified in real time by satellites and sophisticated geolocation technology.

Amano, speaking a day after he visited Tehran and was unexpectedly granted access to Parchin, appeared to reiterate that capability while acknowledging Iran's recent role.

"In the case of Parchin, the Iranian side played a part in the sample-taking process by swiping samples," Amano said in Vienna, adding his experts would analyze them in the coming weeks.

"The agency can confirm the integrity of the sampling process and the authenticity of the samples, which were taken at places of interest to the agency at the particular location in Parchin."

He did not name the place, but did say that he and Tero Varjoranta, the IAEA's chief inspector, visited a building previously only monitored by satellite technology, and indicated it had been altered.

"Inside the building, we saw indications of recent renovation work. There was no equipment in the building," he said before appearing to criticize past construction work at Parchin.

"As I have stated in my reports..  the extensive work that has been conducted at the location since early 2012 undermines the agency's ability to conduct effective verification there.

"Our experts will now analyze this information and we will have discussions with Iran in the coming weeks."

Iran had previously refused permission to enter Parchin, highlighting its military function and stressing the IAEA had already conducted inspections in 2005 that yielded nothing.

Iran has said recent work at Parchin was necessary to repair a flood-damaged road.

Reports that international inspectors would not be physically present during sampling were seized on recently by Republicans in the U.S. Congress, who say Iran could cheat the IAEA's monitoring and inspections regime.

The July 14 nuclear deal between Iran and six world powers -- Britain, China, France, Russia and the United States plus Germany -- ended a 13-year standoff over the Islamic republic's nuclear program.

But the deal cannot go ahead until the accusations about the past possible military dimensions of Iran's nuclear activities are resolved.

Under that agreement Iran, in exchange for the lifting of crippling international sanctions, agreed to curbs on its nuclear program that experts say would make any dash to produce a weapon all but impossible.

The Republican-led House of Representatives this month rejected the nuclear deal. But it was a purely symbolic vote as one day earlier the Senate cleared the way for the accord to come into force.