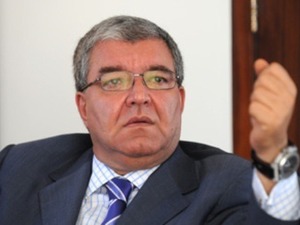 Interior Minister Nouhad al-Mashnouq emphasized on Monday that all the security apparatuses will get together to prevent any attacks or damages inflicted on public and private property in central Beirut.

“With the help of the Internal Security forces, the army and the General Security we will prevent any attempts to inflict damages on the public and private property in downtown Beirut,” stressed Mashnouq in a press conference.

“What we see today is a malevolent rhetoric with a deep hatred for Beirut and the man who reconstructed it (in reference to former PM Rafik Hariri), but we will unwaveringly protect the heart of Beirut,” he firmly stated.

In reference to the hate rhetoric obviously showed in the latest demos in Beirut, Mashnouq said: “The security project that assassinated Hariri once is resuming,” he added in a reference to the Syrian tutelage.

“Beirut is not an orphan and we will strictly prevent with the help of the security apparatuses any attacks on public and private property in Beirut,” he stated, adding “I respect the mobilizations of the youth. “

His comments came during an opening of an ISF building for temporary detention.

On the burden of the Syrian refugees and the role of the ISF in that regard, he said: “Lebanon is the sole country that was able to receive 30% of the refugees in just two years. The refugees crisis has become global and the ISF has a major role in facilitating their matters.”

Beirut witnessed lately a series of demonstrations that were triggered by a waste management crisis.

The protests were primarily held in downtown Beirut where some protesters took their anger on the private and public property smashing traffic lights, setting things on fire, spray-painting walls and shops with defamatory slogans against Hariri.

OMG he's got to go