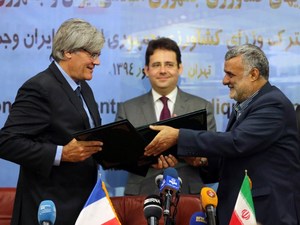 France opened a business development office in Tehran on Monday seeking to renew once-strong economic ties with Iran after the July 14 nuclear deal in the face of "fierce competition".

French Agriculture Minister Stephane Le Foll and Minister of State for Foreign Trade Matthias Fekl inaugurated the "Business France" office on a visit with some 150 business leaders that is to run until Wednesday.

Le Foll warned that French companies face "fierce competition" from other European and American firms seeking a slice of the Iranian market with its 79 million population.

France's longstanding business ties with Tehran should give it an edge, he said. "What we want is to promote and rely on what already exists, on what must be developed and then also to innovate," the minister said.

In the sanctions era, French companies scaled back their activities but without closing shop in the Islamic republic.

British Foreign Secretary Philip Hammond visited Tehran last month following in the footsteps of his Italian, French and German counterparts as European businessmen line up to invest in the Islamic republic's drive to revamp its battered economy.

Fekl said the opening of the "Business France" office in Tehran was "a strong signal of our desire to work in the long-term" with Iran.

French trade with Iran dropped from some 4 billion euros ($4.5 billion) in 2004 to 500 million euros ($565 million) in 2013 as a result of international sanctions imposed on Tehran since 2006 due to its disputed nuclear program.

But the landmark accord struck in July with six world powers -- Britain, China, France, Russia and the United States plus Germany -- provides for lifting the sanctions in exchange for Iran not developing nuclear weapons.