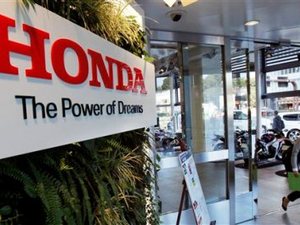 Honda's quarterly profit tumbled 56 percent, battered by the strong yen and production disruptions from the March tsunami disaster that are likely to be compounded by flooding in Thailand.

The automaker, which makes the Accord sedan and Odyssey minivan, said Monday that net profit for the July-September fiscal second quarter fell to 60.4 billion yen ($788 million).

Honda Motor Co. said flooding in Thailand, where the automaker has parts suppliers and assembly lines, made it too difficult to forecast earnings for the full fiscal year through March 2012.

A projection will be announced when it becomes available, the company said.

The Thai floods are the latest blow to Japanese manufacturers as they struggle to recover from the tsunami while also being pummeled by the yen's record surge.

Japanese automakers in particular use Thailand as a production base in Southeast Asia.

Earlier Monday, Japanese authorities intervened in the currency market to weaken the yen against the dollar and ease pressure on Japanese exporters.

That caused the dollar to jump nearly 5 percent to above 79 yen after earlier touching a post World War II-low of 75.32 yen — a level that is excruciating for exporters such as Toyota Motor Corp. and Nintendo Co.

The strong yen, which erodes foreign earned income, took a bite out of Honda's profits.

The automaker estimated that if sales were calculated at the same exchange rate as last year, quarterly sales would have fallen a less severe 12.3 percent.

Revenue from nearly all regions declined. Domestic sales were down 13.2 percent, revenue from Europe sank 10.4 percent, and in Asia outside Japan sales fell 10 percent. Sales to South America, Africa and the Mideast inched up 0.8 percent from a year earlier, the company said.

Honda's motorcycle business was one of its few bright spots in the quarter, with sales rising 14.2 percent to 357.3 billion yen ($4.6 billion).