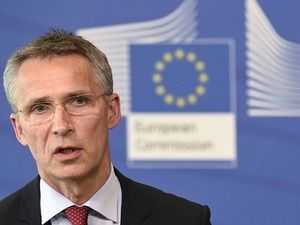 "It underlines the importance of Russia making clear what are their intentions," Stoltenberg told Agence France Presse in an interview at NATO HQ in Brussels.

"I think the first step now is to sit down with the United States and to make clear what are (their) intentions... and to try to cooperate and give a constructive contribution to the efforts led by the United States to fight ISIL (Islamic State)."

In no circumstances should the build-up be used to bolster President Bashar Assad, a long-time Russian ally, Stoltenberg said.

After a string of reverses for Assad on the ground earlier this year, Moscow has begun resupplying him with modern military equipment, causing concern in western capitals and raising questions about Russia's intentions.

Russia also began reinforcing its naval base in the Syrian port city of Tartus and building up facilities in the president's Western stronghold around Latakia.

"It is of course a cause for concern," he said of the military build up.

Stoltenberg said this rise in Russian activity "increases the need for them to make sure that they play a constructive role and that they seek to do that in a cooperative and constructive way with the (anti-IS) coalition led by the U.S."

NATO welcomed recent contacts between Moscow and Washington on Syria, he said, "but at the same time I am concerned because there is also the risk that these forces will be used to support the Assad regime.

"To support the Assad regime is not a constructive contribution to fighting ISIL (nor) to finding a political solution to the conflict," he said.

"The Assad regime is actually part of the problem," Stoltenberg added.

Washington and its allies have up until now insisted that Assad has no future in Syria, but there have been recent signs of a change, perhaps allowing him an interim role until a new government is formed.

U.S. Secretary of State John Kerry said on Saturday that while Assad must ultimately step down, that need not be immediately on reaching a settlement to end a conflict which has now cost some 250,000 lives.

Russia has consistently backed Assad as a bulwark against what it sees as a terrorist threat made worse by Western bungling which has allowed IS to seize huge swathes of territory in Syria and neighboring Iraq.