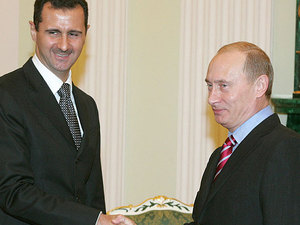 Russian President Vladimir Putin has stolen the spotlight at the United Nations with a swaggering push on the Syria crisis as he tried to shake off Western isolation over Ukraine.

In his first speech to the UN General Assembly in a decade, Putin on Monday called for a broad UN-backed coalition to fight Islamic State (IS) jihadists before sitting down to talks he called "constructive, business-like and surprisingly open" with his U.S. rival Barack Obama.

The 90-minute meeting between the two leaders was their first official face-off after almost two years of the United States freezing out Moscow. It came with Obama's admission that he was willing to deal with the Kremlin strongman in a bid to resolve the bloodshed in Syria.

Russia thrust itself back into play by dispatching troops and fighter jets to Syria, sparking fears in the West that Moscow might join in the fighting alongside its old ally President Bashar Assad.

The Kremlin has batted away demands by the West and regional players such as Turkey and Saudi Arabia for Assad to go immediately and insists members of the U.S.-led coalition need to join forces with him to defeat what they say is the greater evil of IS.

After the meeting Putin appeared pleased that Obama had agreed to Russia having a role in the debate and said that in his opinion "there is a basis to work on shared problems."

A senior White House official said, however, that while both leaders agreed on the need for a political transition in Syria they "fundamentally disagreed" on the role of Assad.

In a sign of the stakes, UN chief Ban Ki- moon said that if Washington and Moscow could make headway over the four-and-a-half-year-old conflict then progress might be possible.

Later he oversaw an uncomfortable toast in which the two presidents clinked glasses. According to Putin, Obama made his to the success of the United Nations.

While Putin's pivot over the Middle East focused attention on Syria, the Americans were keen to show that Obama was not letting the Russian leader off the hook over his seizure of the Crimea region from Ukraine and his alleged backing of a separatist conflict in the country.

The senior White House official said the first half of the Obama-Putin meeting had centered on Ukraine and the U.S. president made a point in his speech of upbraiding Moscow over its meddling in its neighbor.

But Putin's appearance -- heavily trailed by the slavishly loyal state television back in Russia -- still gave him a chance to push the fallout over Ukraine into the background.

He shrugged off an apparent walk-out by Ukrainian President Petro Poroshenko ahead of his speech to the General Assembly and said that the West would never be able to cut Russia out of world affairs.

"In terms of a country like Russia, that is simply impossible," Putin said after his meeting with Obama.

"You just need to look at her size on a map."