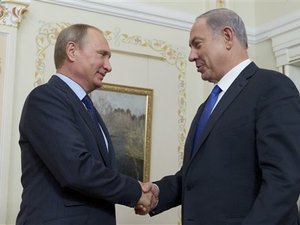 Israeli Defense Minister Moshe Yaalon has warned that Israel will not tolerate advanced weapons reaching Hizbullah, which has fought alongside Syrian troops.

“We have no intention of giving up our ability to defend our interests. And I suggest that no one tests us,” he warned.

He said Israel's Prime Minister Benjamin Netanyahu told Russian President Vladimir Putin during a meeting in Moscow that "we are not involved and we don't have any interest to intervene in the civil war in Syria, but we have to keep our interests."

Moscow has been ramping up its involvement in Syria in recent weeks by ferrying weapons, troops and supplies to an airport near the Syrian coastal city of Latakia in what the U.S. sees as preparations for setting up an air base there.

Yaalon said Russia's presence in Syria is near the coast, far from Israel.

"It will help in stabilizing the area, and especially if Russia has the intent to fight the Islamic State together with the United States and the Western coalition," said the former deputy head for assessment of the Israeli army's military intelligence.

Sheikh Naim Qassem, deputy leader of Hizbullah, which has sent fighters to help Syrian President Bashar Assad, said Tuesday that "Russia intervened by its weapons and capabilities because there is someone that stood on his feet," referring to Assad, who is at war with an array of rebel and Islamic militant groups.

Qassem said "the world today admits that a solution in Syria can be only achieved with President Assad."

hello lebjack
I like to introduce myself. I am a friend of flamethrower. I post, vote, and mass report on his behalf whenever he asks me to. He asked me to ask you if you knew why he was banned and treated like a diseased leper?

hello @pajama.boy
I have no questions for you

In 2 years time Ebola and Israel will be allies.

In 2 years Ebola will be eradicated, but Israel will still be there.

You support Salafis, Wahabis, Nusra, Da3ish, Israel, Zionist.
That is a good thing you admit it Saudijack, can you tell the rest of these guys to follow your example and show your true allegiance to Wahabism and Zionism?

can you tell the guys when you will admit it is a martyred iranian jihadi terrorist family in your avatar?

Give it a rest Ali your ideology is no different just calls hate another name. Go liberate the world from Iran and leave us alone.

Let Israel attack if they want to do it so much. The Resistance will not make it easy for them anyway

Mystic just do us a favor if this happens: Don't keep civilians at gunpoint in their homes so they are hit by Israeli bombs ok? Children don't need to die because of your immense carelessness.

so proud of you as always
Bravo

Israel talks as if they are capable of doing anything else. Fighting Islam is not as easy as they thought.