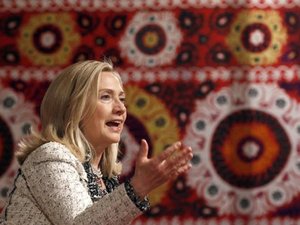 Turkey's economic development and its role as a regional power will be reinforced by a strengthening of its democracy and peace with its neighbors, U.S. Secretary of State Hillary Clinton said Monday.

"Turkey’s ability to realize its full potential depends upon its resolve to strengthen democracy at home and promote peace in the neighborhood," Clinton said in a speech at the American-Turkish Council.

"Turkey’s economic leadership could be a powerful force for progress across the region," she said.

"A vibrant economy depends upon the free exchange of ideas, the free flow of information, and the rule of law. Strengthening due process and cracking down on corruption helps any country grow more rapidly. So would protect a free and independent media."

The Turkish economy, the 17th largest in the world, staged a spectacular recovery from the global crisis, growing 8.9 percent in 2010.

But unemployment remains a major challenge for the government in a country where many young people swell the workforce each year, and a declining farming sector drives unqualified laborers to urban areas.

"The process of perfecting a democracy is never complete. It requires, as we know from our own experience, unrelenting effort, and vigilance to prevent backsliding," said the U.S. secretary of state.

"Reducing tensions with neighbors and increasing stability in the neighborhood is a recipe for expanded growth and influence. Turkey’s leaders understand this," she said.

"But it will take bold choices and strong political will to leave the past behind and embrace the future Turkey deserves."