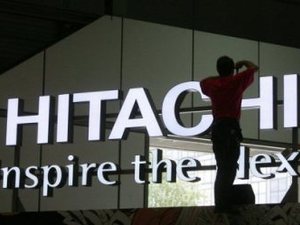 Japanese high-tech firm Hitachi on Tuesday said its net profit fell 67.8 percent in the six months to September, hit by the impact of the March earthquake and a strong yen.

Hitachi's net profit came to 50.9 billion yen ($652 million) in the April-September first half, which was still slightly higher than a recently upgraded profit forecast of 50.0 billion yen.

"Although we pushed with cutting materials and other costs, (the profit) came below the year-before level due to the impact of the Great East Japan Earthquake and the strong yen," the company said in a statement.

Like many other Japanese firms, Hitachi -- whose products range from microchips to nuclear power equipment -- reported damage to its production facilities and electricity supply problems after the March 11 disaster.

But the company last week revised its first-half net profit forecast five times higher to 50 billion yen, citing its ability to recover from the March disasters.

Hitachi left unchanged its net-profit projection of 200 billion yen for the full year to March 2012, down 16 percent from a record 238.87 billion yen last year.