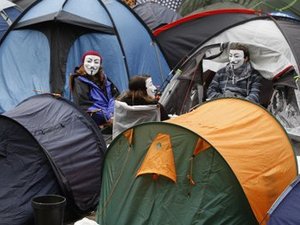 British authorities were Tuesday to tell anti-capitalist protesters camped by St. Paul's Cathedral to remove their tents from outside the London landmark within 48 hours or face legal action.

The City of London Corporation local authority was to hand a letter to demonstrators who have turned the churchyard into a sprawling campsite and triggered turmoil in the cathedral hierarchy.

On Monday, Graeme Knowles, the head of St. Paul's, resigned after facing criticism for trying to move on the protesters, who are inspired by the Occupy Wall Street movement in the United States.

The Occupy London Stock Exchange group pitched up in the churchyard two weeks ago. Around 200 multi-colored tents are spread out by the entrance and the north side of the cathedral.

The dispute over the demo has plunged the Anglican Church into crisis as it wrings its hands over how to handle the demonstrators while maintaining its principles.

Knowles became the third churchman to quit over the issue, saying his position had become "untenable".

St. Paul's said Tuesday the cathedral was not taking joint action with the Corporation of London in legal moves to clear the camp.

"Members of chapter met yesterday following the resignation of the dean and are due to meet with the Bishop of London today," a spokesman said.

"The chapter has not yet sought an injunction, nor are they serving notices on the protesters. They are committed to a peaceful resolution at all costs."

Overnight around 50 of the protesters, dressed as zombie bankers, marched into the city to mark Halloween.

They danced to Michael Jackson's 1984 hit "Thriller", stopping traffic outside the Bank of England. Police moved them on but they resurrected the dance outside the Royal Bank of Scotland's offices.

Home Secretary Theresa May urged the authorities to coordinate moves to clear the encampment.

"What I want to see is the church authorities and the Corporation of London and the police working together to ensure that the protesters can be moved as soon as possible," the interior minister said.