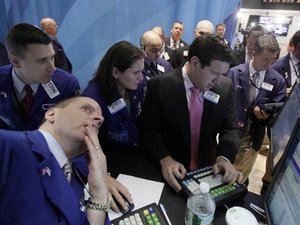 Even as Europe's debt crisis spirals out of control, Wall Street is casting an eye on a fast-approaching congressional deadline that could spark a debt crisis this side of the Atlantic.

U.S. investors -- for weeks preoccupied with the tumult raging in Greece and the broader Eurozone -- are starting to look with trepidation at the November 23 deadline for a Congressional committee to agree to $1.2 trillion in deficit cuts.

If the deadline is missed, a series of automatic and draconian cuts will enter into force. It is a prospect that is spooking Wall Street, which has great sway over the price the U.S. pays to borrow.

The bipartisan group still appears far from reaching a deal; alarming investors who warn the economy will be battered if compulsory cuts are introduced.

"The (Barack) Obama administration aims to include a maximum of elements from the American Jobs Act in the debt super committee's proposal," said Michala Marcussen, an economist with Societe Generale.

"Failure to agree even a minimum of the American Jobs Act will see our U.S. growth forecast for 2012 pushed down to 0.6% from 1.8% all else being equal."

With high unemployment and a moribund jobs market, spillover from the European crisis already is imperiling the weak U.S. recovery.

In joint testimony on Tuesday, Erskine Bowles and Alan Simpson -- party luminaries who came up with their own deficit plan -- warned the "super committee" it must act, now.

"Time is not on our side and we truly can no longer afford to wait."

"Our great nation's fiscal house is now made out of straw and any significant blow -- an oil shock, a collapse in Europe -- can blow our house down."

But there seemed little evidence that the message was heard.

"I would hope we can get something done there, but, you know, if they can't get it done, they can't it done," said Senate majority leader Harry Reid.

The Republicans, he claimed, want "this grand bargain without any sacrifice to their people that have most of the money in this country ... it takes two to tango."

With just over a year left until the 2012 presidential elections lawmakers have largely stuck to party talking points.

Republicans have rejected any hint of tax cuts and Democrats have insisted on a mix of stimulus spending, tax increases and longer-term spending cuts.

According to Gary Thayer, chief macro strategist at Wells Fargo "the next few weeks of deficit negotiations are going to be difficult."

"The logic was that the automatic spending cuts would be so undesirable that the super committee would agree to other deficit reduction that would be more acceptable."

"Between now and late November, investors may begin to worry about the deficit reduction talks. If it looks like very little progress is being made investors could turn negative."

If the markets were sufficiently spooked it could spark a bond sell-off -- raising the interest rates the U.S. must pay to bondholders -- a pattern that has become common in Europe over the last year.

Conversely reaching a deal could also result in a growth premium according to Barry Knapp of Barclays Capital, by keeping some stimulus in place.

"Our expectation (is) for an agreement that keeps stimulus in the system through 2012, with a couple of additional supply-side measures," he said.

"This might seem optimistic, given the lack of (super committee) progress, but we believe both House Republicans and Senate Democrats need a deal if they expect to hold majorities in the 2012 elections."

"A late-year deal that avoids significant fiscal tightening in 2012 could have a positive effect on capital markets and business confidence, much like the extension of (George W.) Bush-era tax cuts in December 2010."