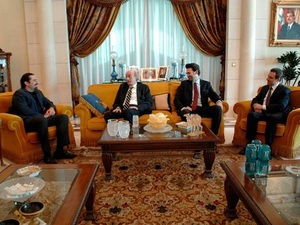 Informed sources told the daily that his proposal calls for reaching an agreement over a new president and understandings over a new government and parliamentary electoral.

The gatherers agreed however that the initiative “needs more time” to be adopted in order to garner more support for it, said al-Joumhouria.

“An agreement on such a deal will not be easy and the time is not ripe for it given that some sides' stances are hinging on regional and international developments,” it added.

Jumblat had paid a visit to Saudi Arabia on Tuesday where he held talks with Hariri and a number of Saudi officials, including King Salman and Foreign Minister Adel al-Jubeir.

The monarch had renewed his support for Lebanon's constitutional institutions, especially the army and security forces.

He stressed that the kingdom is keen on the election of a new president “seeing as it is the first step to restoring normalcy at constitutional institutions.”

He called for an agreement over a head of state “who appeases the majority of the Lebanese.”

Health Minister Wael Abou Faour, who accompanied Jumblat on his trip, told the daily An Nahar Friday: “The visit was very positive.”

The MP returned to Lebanon on Thursday.

Sample of M8 logic: I am armed and funded by Iran, it does not mean I implement Iran's agenda.

Another sample of M8 logic: I have Nou7 Zaiter as part of the resistance, it does not mean the resistance supports and shelters drug dealers.

you should have turned him alive

Did KSA convince ($$$) Jumblatt of accepting Geagea as president? This would be quite a development if it is true given the bitter rivalry between these two ex warlords.

Jumblatt and his latest "initiative" to "resolve the deadlock" lol