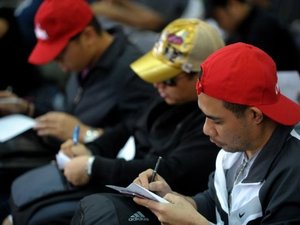 The Philippines said Wednesday it had banned Filipinos from travelling to work in 41 countries and territories, including Lebanon, that had allegedly failed to provide enough safeguards to protect them from abuse.

The Department of Labor and Employment in a board resolution posted on its website said the blacklisted countries failed to sign international conventions protecting foreign workers.

Neither have these countries signed agreements with the Philippines "on the protection of the rights of overseas Filipino workers," the resolution said.

They also do not have their own laws protecting foreign workers, it added.

Included in the list are Lebanon, Afghanistan, Libya, Iraq, Sudan, Chad and Pakistan.

Carlos Cao, head of the government's overseas employment agency, said the 41 countries did not receive too many Filipino workers so a ban would not have a very large effect.

"These are the smaller countries with small markets. The negative impact is not going to be very big," he told Agence France Presse.

The ban will also not affect Filipino workers who are already in those countries so they will not have to come home until their contracts expire, Cao added.

Labor Secretary Rosalinda Baldoz said the law also exempts international companies and U.S. military facilities that might be operating in these countries.

Garry Martinez, chairman of Migrante, an activist group for overseas workers, said that the ban might just lead to more Filipinos going to work illegally in these 41 countries.

He said the government should actually investigate cases of abuse rather than setting up loose criteria for a ban.

There are an estimated nine million Filipino overseas workers, or about 10 percent of the country's population, official statistics show.

Many of them work as maids, laborers or seamen in areas where they are vulnerable to abuse although many Filipinos also work in higher positions in Western nations.

Their dollar remittances have traditionally kept the Philippine economy afloat, although reports of abuse are common.

While Manila has in the past banned deployment to some areas locked in conflict, many Filipinos still leave through illegal means rather than take low-paying jobs at home.

The Philippines has become a major outsourcing / offshoring destination for North American corporations. Recent stats put the number of jobs in this category at about 1.5 million. Income levels are rising very rapidly, generally at a 10-20% annual rate. This coupled with the growth in Asia - driven by China, India and Indonesia - is leading rapid development in the Philippines.

What this all means is that in a matter of a few years or perhaps a decade or two, there won't be a need for filipinos to travel to countries like Lebanon and work as servants. In fact, if the Lebanese aren't careful, perhaps we'll start seeing the opposite - Lebanese going to the Philippines to work as servants!

It's time for the Lebanese to start focusing on economic development, and leave all this stupid politics pro-US vs pro-Iran nonsense behind them.

@ Muhamad What do you say? from Europe, who? Swedish or danish working as maid in Lebanon?

why a country poor like lebanon needs so many workers from outside? i suspect that the lebanese are just too lazy to work and think work is shameful,i visited the country a few times and i just found out that most young people are just worrying about fighting the wrong battles all that because most people has relatives outside the country that keep sending money then they can sitdown,smoke,play cards,dance and wear designers clothes and gossip

they are right when we see how some people treat their workers like slaves...and even beat them like they were animals!
i find it so stupid to hire a maid just because all neighbors have one, but it seems to be trendy and a sign of wealth, so pitiful...

The answer is because Lebanese treat these people like animals, pay them 150$ , lock them inside their house, feed them old food, men harrase them sexually. Women beat them , and want them to stay awake and work for more than 10 hours per day, and not let them go out of the house. So that's the answer why Philippine won't let their citizens work as slaves, and be humiliated while lebanese women are not even taking care of their kids, of course the maid must change the baby's diper, bath ,and feed, while lebanese women should do their nails and go shopping. Those people are humans, and they have the right to be treated equally as any other human in this world. But the problem is the lebanese authoritiez not taking drastic measures to prevent accidents, and punish people who treat other humans as slaves.

I am working in one of the housemaid employment agency here in lebanon and i saw a large numbe of filipino housemaid employees being treated like an animal...The lebanese women here are a way too beast when they treat thise housemaid.they gave them food stale food,let them work for 10-12 hours,sexually abused by thier male employers,send them home without paying thier salaries...MOst of the people here are beast!!!I have a lot of stroies t tell when i go home about the things that i witnessed how cruel and animals most of the people in this country...

I would like to mention that not everybody here treats their housemaid that way. I personally really like the person working in my house. She eats the same food than me, I pay her for overtime, she gets one day off (as this is normal) per week and she is a real gem to my kids. That said, I m French, hence maybe I am used to treating people nicely since in my country abusing workers is punishable by law. Now what I don't get is how many Lebanese don't trust their maids to go out of the house and yet leave their kids in their care.... how these same Lebanese which are educated people, always so eager to invite you to restaurants will not accept to give the minimum wages of usd400 per month to their housemaid??? Most of the migrant workers working here are making huge sacrifices, leaving their kids behind to earn money and give their kids a brighter future.... hence my full respect for my wonderful housemaid.

u are one of the great sponsor

if its still banned until now how comes 1 of my friend has passed by POEA and she said she is legal now shw is coming in lebanon ds week....the name of her agency is MACPREGO INTERNATIONAL INC.

not all lebanese are bad, my mother's employers are good to her, in fact every time her contract expires her employer renew it, she's almost 10yrs there...

We treated our maid like she was family for three years and trusted her so much, her work was second to none and we never treated her badly not once she sat at the table and ate the same food sometimes she would cook Philipino food and often ate. So in general never abused, the problem raised when she got caught sneaking out the door while everyone was asleep seen by our neighbours a car picked her up and then dropped her off early hours of the morning, of course we know what for, we questioned her the next data day she denied all and that's when's the trust ended and we booked her a ticket for the Philipines two days late, unfortunately she caught on and ran
away. We are sure she was corrupted by the local prostitute network in the area and was told she will get more money else where, we where paying her 450$ per month. She is still on the run without passport. Never ever we treated from what I am reading in these blogs. Your views.