Lloyds Bank Boss Temporarily Steps Down due to Illness 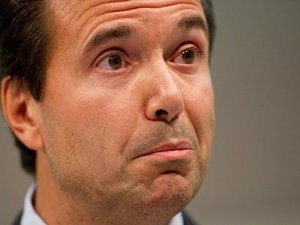 Britain's state-rescued Lloyds Banking Group said on Wednesday its chief executive Antonio Horta-Osorio had temporarily stepped down due to illness and was being replaced by its chief financial officer.

Horta-Osorio, 47, who became chief executive in March, is understood to be suffering from fatigue, according to sources.

"The board of Lloyds Banking Group announces that following medical advice Antonio Horta-Osorio is taking a temporary leave of absence from his duties as group chief executive of the bank due to illness," LBG said in a statement.

"Antonio is expected to return to his position before the end of the year," it added.

Lloyds Banking Group, which is 40.2 percent owned by the British government after a huge bailout at the height of the global financial crisis, said it would publish its third-quarter results on Tuesday, as planned.

LBG has slashed more than 40,000 posts since 2009 as it looks to nurse its way back to health after its part-nationalization.

The lender, which was sunk by the ill-fated 2008 takeover of rival bank HBOS, is also seeking to cut its international presence to just 15 countries by 2014.

Horta-Osorio was formerly head of Santander UK, the British wing of the Spanish bank. The Portuguese national's predecessor Eric Daniels left amid shareholder anger after he oversaw the government-brokered takeover of HBOS.