NYC Artist Returns to Gallery Where she Gave Birth 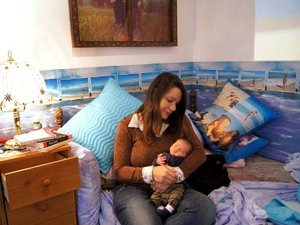 Marni Kotak gave the performance of her life when she gave birth to baby Ajax in a New York City art gallery turned home birthing center last week. Now they're back.

"It's exactly how I wanted it to be," Kotak said in an interview with The Associated Press on Tuesday, her first since giving birth. "Most of the people hung around for hours holding the baby, talking about the experience together and getting food and other supplies that we needed" until she went home.

The 36-year-old performance artist delivered the healthy nine-pound, two-ounce baby boy at the Microscope Gallery on Oct. 25 in a performance she described as the "highest form of art."

The birth was the climax to an installation that began on Oct. 8. It saw Kotak talking to visitors in a bedroom setting surrounded by her most treasured objects: Her grandmother's bed, where baby Ajax was conceived; a bright green chair in which she was rocked as a baby; videos and photos of her other performance pieces, including re-enactments of her grandfather's funeral and her own birth.

It wasn't weird to give birth in front of the respectful and quiet gallery visitors, she said.

"I had met them all ahead of time and got to know them a little through our conversations in the gallery," she said. "They were sincerely interested in the project and really supportive of the process."

Kotak, an artist whose performances focus on everyday life experiences, said she had been in and out of the gallery in Brooklyn's Bushwick neighborhood between Friday and Saturday, then returned Monday to continue being part of her exhibit. She and the baby will be there daily until the installation closes on November 7.

She said she is being visited by about 20 people a day, the same number who came to see her deliver Ajax in a birthing pool.

Blood-stained pillows and sheets are now also part of the installation.

For her next project, Kotak plans to write a memoir of her first year as a mother that she may later present in an installation-type exhibition.

She said she was surprised by all the media attention her "Birth of Baby X" project got but happy with people's positive response to it.

Kotak said she and Bell will share the details of the birth with their child "over time as an organic process," communicating that by being born in an art gallery they were telling the world his life is a precious work of art.