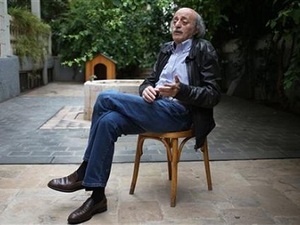 He said via Twitter: “I wonder at how the presidential race now has to pass through the garbage dumps instead of ballot boxes.”

He made his remark in reference to political bickering over the elections and the alleged manipulation of the garbage crisis for political gain.

“Shehayyeb will take it upon himself to reveal the details of the trash file if the issue reaches a dead end,” warned Jumblat.

Shehayyeb has been leading efforts to resolve the garbage crisis that erupted with the closure of the Naameh landfill in July as politicians failed to find an alternative for it.

The crisis has led to the pile up of garbage on the streets throughout the country, raising fears of the environmental and health repercussions of the problem.

12 minutes ago Speaker Nabih Berri voiced hopes on lawmakers to facilitate the convention of a legislative session, and announced that the World Bank has warned that Lebanon is not on the bank's aid list for many years.

Neither aoun nor nassrallah care about the world bank's aid because they get their money from Iran. Let the people of Lebanon suffer.

I don't see any difference btw them since the so called fake independence day!! so let us all elevate presidency from this dirty level!! & make elections straight from the people ;) for once make a good history ;) after all people are z source of power right !!?! :-)

lebanese, still to this day, put religion above government...when that changes and after at least a hundred years have passed, then maybe the people can elect presidents and politicians putting aside their religious beliefs... that's gona take a lot of education and rehabilitation

* as exceptional presidents for me that broke the chain are only Bashir Gemayel & Camille Chamoun! (one been murdered the other fought till death) God protects GMA who is continuing the fight!!

Bashir and Camille are one of a kind, GMA can not be compared to them.